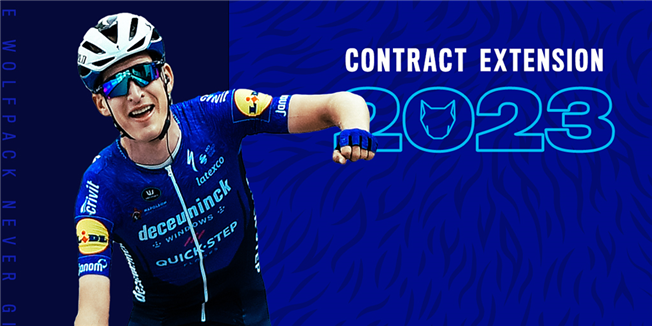 The 24-year-old Mikkel made a big step forward this season, taking his first pro victory in March, at the Settimana Coppi e Bartali, which was followed by a stage win in Vuelta al Pais Vasco. His remarkable results didn’t stop there, as in the summer he podiumed at the Clasica San Sebastian, finished top 5 overall at the Tour de Pologne and runner-up behind teammate Remco Evenepoel at Druivenkoers Overijse, before two other impressive top 5, at the Tour of Britain and Primus Classic.

His strong results and the progress he made have naturally landed him a two-year contract extension with the Wolfpack, where he started his career in 2019 after a short spell as a stagiaire.

“I’m honoured. I have had so many great experiences in my life as a pro rider so far as part of this amazing team. There have been a lot of things that helped me improve and learn more with each season. I feel each month the improvement I’m making and I look back on a lot of memorable victories I’ve been part of riding with such big names. To be honest my teammates and the staff feel like family, we spend so much time together on the road, and when you’re on the road you feel like you are at home, I think that’s the greatest thing. The staff creates a great atmosphere every time. They, in my opinion, are the main reason for the culture and the ambiance in the team. When the staff are always giving 110% for us riders, then we also feel like we need to give 110% and it makes you more motivated. Our staff really makes a big difference.”

Deceuninck – Quick-Step CEO Patrick Lefevere was aware of the Dane’s talent as early as 2018, before he turned pro: “I first took Mikkel as a stagiaire in the team and when we signed him, I knew he would be a great asset for us and that’s what he proved so far. This season he made a big step, taking two wins and several other strong results in a wide range of races. He still has room to improve, and that’s what we will try to do. You feel Mikkel really feels at home here and together we’ll aim for some more successes in the next two years.”

“Coppi e Bartali this season was the greatest moment for me so far as a rider as it was my first professional victory and it was also in Italy, my second home, which made it even more special. It was a very important step to take my first win. All the sacrifices and hard work you do and then being able to raise your hands is something so nice that you will carry with you forever”, said Mikkel about his first big moment of the year.