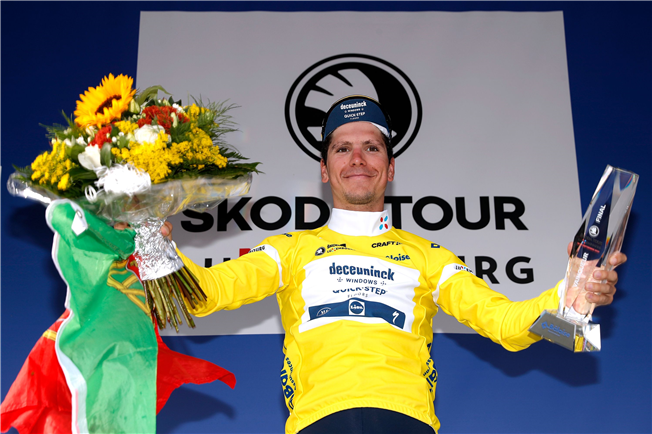 João Almeida continued his red-hot form by securing the GC victory at the 81st edition of the Tour de Luxembourg after one of the most dominant rides seen at the race in recent history, the 23-year-old taking home also the points and youth classification, in addition to four top 3 finishes, including his victory on the opening day.

Created in 1935, the same year as the Vuelta a España, the Tour de Luxembourg marked the second time this year that João triumphed in a stage race, after the Tour de Pologne six weeks ago, where he captured his maiden World Tour victory. Supported by an incredibly strong Deceuninck – Quick-Step team, the man from Caldas da Rainha rode calmly and authoritatively, asserting his dominance over the race regardless of the terrain, and became the first Portuguese in history to win the Tour de Luxembourg – racking up our team’s 60th victory since the start of the year.

Almeida was joined on the overall podium of the competition by teammate Mattia Cattaneo, who finished third thanks to a solid display in the time trial, making Deceuninck – Quick-Step the first squad in six years to place two riders in the top three. But the most special moment, as João was quick to point out after the last stage, was having the whole Wolfpack there to celebrate winning the team classification.

“To notch up another stage race after Poland feels amazing, but what made everything more memorable was being with all the guys on the podium to receive the best team trophy. It’s thanks to them that this was possible, this is a team victory, and I am grateful for their effort and incredible work and commitment. We had an incredible week, we were there every single day, fought hard and took two stage victories, so we can be proud of what we achieved. I had good legs in Luxembourg and I hope to carry this form into the last races of the year”, said the young Portuguese, who sits on six victories so far this season.