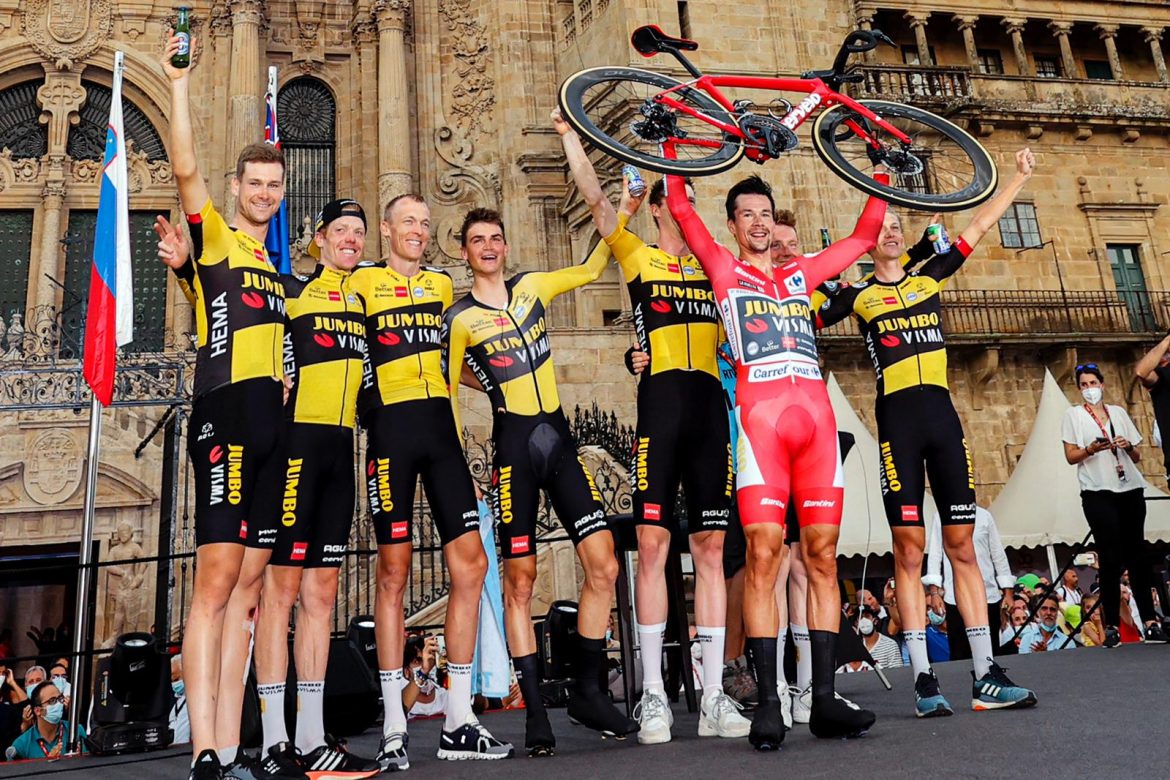 Primoz Roglic has won the Vuelta a España for the third consecutive year. The leader of Team Jumbo-Visma defended his lead in the standings in the final time trial to Santiago de Compostella with flying colours. The Slovenian set the fastest time and won his fourth stage of this Vuelta.

Roglic kicked off the 76th edition of the Spanish grand tour with a win in the prologue in Burgos. The Slovenian also took three more stage victories, including the seventeenth stage to Lagos de Covadonga. Earlier this year he won the Tour of the Basque Country and he became Olympic time trial champion. For Roglic it is his eleventh victory of the season and the 34th for Team Jumbo-Visma.

Roglic is happy that he has been able to win the Spanish stage race for the third time in his career. “It was another beautiful day and it were three beautiful weeks. I am very happy for myself and the guys around me. This is truly a team effort. It was a tough last stage. Still, I enjoyed the crowd and the support along the way.”

“I just tried to focus on the stage today and to do my very best”, the Slovenian continued. “It’s unbelievable, it’s crazy. Sometimes you win by a big difference, sometimes by a little. But any way of winning is fantastic. We took it day by day. I did my best and enjoyed it. I am honoured to win for the third time.”

Sports director Grischa Niermann is more than proud of the performance of the Vuelta team. “It’s great to finish the Vuelta in this way. We knew that Primoz would be the big favourite for today’s time trial. He still had to go deep, but he managed to win the time trial. A great day. I have seen a strong team these weeks. When I look back at the last three Vueltas, this is the first edition where we had everything under control the entire race. I think we played it well. I realize how special it is to win for the third time in a row.”

General manager Richard Plugge also expressed his admiration for the team in Spain. “I experienced the past weeks with pride. We have seen a very strong team. We were able to control the race in a good way. The strength of our team across the board makes me very proud. Primoz is one of the only three riders to win the Vuelta three times in a row. I think we have to keep realizing that only a few riders are able to win a grand tour. It is therefore very nice that we’ve now won again. You never get used to that and it is something to be very proud of. This season we are again one of the best teams in the world. We still see room for improvement, so we will continue to work hard on that in the years to come.”