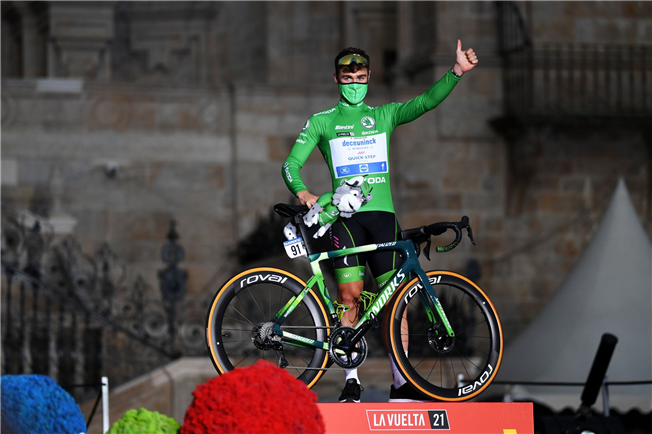 Deceuninck – Quick-Step wrote history again, this time by becoming the first team ever to win the points classification at the Tour de France and Vuelta a España in the same season with two different riders. After Mark Cavendish captured the green jersey in July on the iconic Champs-Élysées, Fabio Jakobsen did the same a couple of weeks later at the last Grand Tour of the season, in Santiago de Compostela, at the 76th edition of La Vuelta.

The Dutchman made one of the most amazing and memorable comebacks in the history of the sport, just one year after the Tour de Pologne crash which marked the road of a long and arduous recovery, that in the words of Fabio, concluded with his victory in Molina de Aragon. Two more successes followed shortly after, in La Manga del Mar Menor and Santa Cruz de Bezana, the latter coming on his birthday and giving the 25-year-old enough of a buffer in the points classification ahead of the race’s final week.

From there on it was all about surviving the brutal mountains, which Fabio did thanks to an incredible team effort, with all his seven Deceuninck – Quick-Step teammates constantly shepherding and bringing him home safely, a laborious and fully committed effort for which he was full of praise in Santiago de Compostela, where he took to the podium after the final individual time trial to receive the points classification jersey, a first for a Dutchman at La Vuelta in 10 years.

“To finish here in Santiago de Compostela is my biggest victory. Who would have thought about this one year ago? As I came closer to the finish, I was waving to the fans who were shouting my name, seeing them do this was really beautiful. A hat-trick of stages and the green jersey is something I would have never dreamed of three weeks ago. This achievement was possible with the help of my teammates.”

“They were with me everywhere – on the climbs, on the descents, in the valley – they rode themselves inside out for me and I’m incredibly grateful to them. This jersey represents the Wolfpack, everything what this stands for and our strong connection. I want to say a big thank you to everybody involved: the guys, the staff, the sponsors. It’s a fairy tale!”, said Fabio, one of Deceuninck – Quick-Step’s two riders to win a stage at the last Grand Tour of the season, alongside Florian Sénéchal.