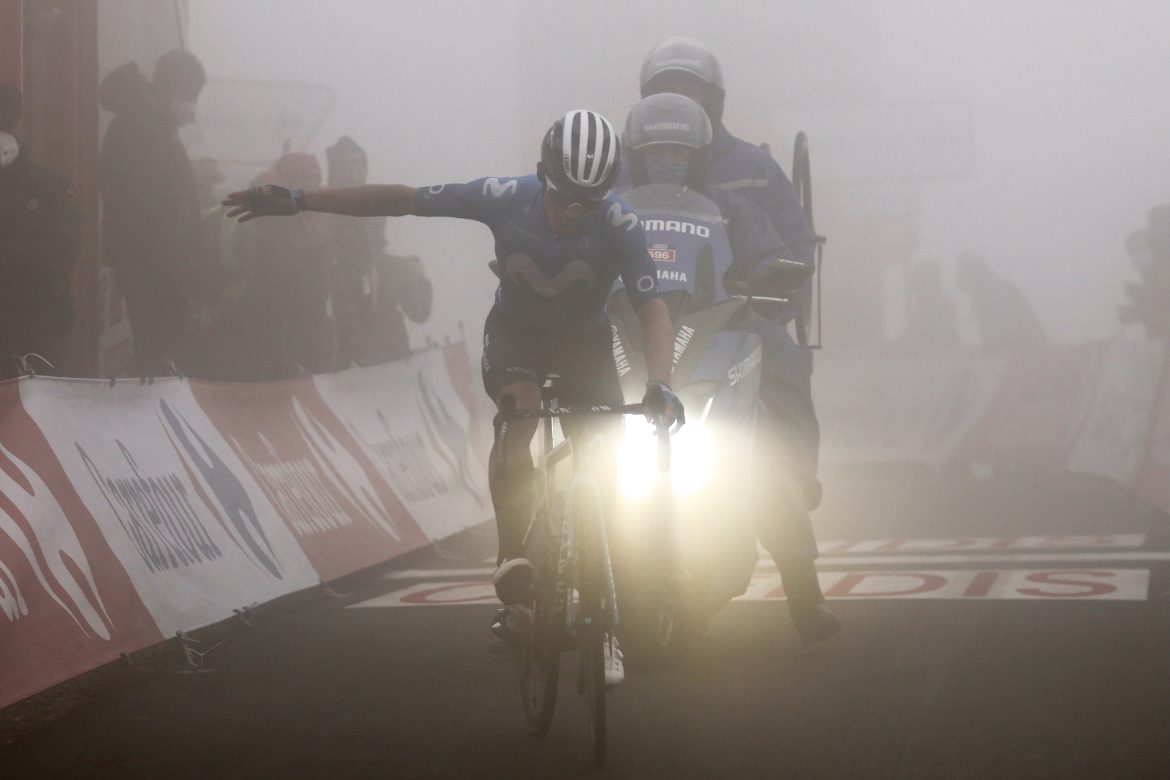 Decimated by the crashes, yet never losing a bit of commitment, the Movistar Team riders were finally able to celebrate at the 2021 La Vuelta on Thursday with a victory they really deserved – and at no less than the Queen stage, with Miguel Ángel López supported by a magnificent group of team-mates during day 18 of the race from Salas to the Altu d’El Gamoniteiru (Hors Categorie).

The five riders from the Telefónica-backed squad -backed before the stage by Telefónica CEO José María Álvarez-Pallete and Telefónica Hispanoamérica CEO Alfonso Gómez, who spent the day with the team- looked like way more over the tough course in Asturias. Imanol Erviti, part of the early break, was caught by the bunch into a perfect place, after the descent of La Cobertoria (Cat-1), to do a five-star work alongside Nelson Oliveira and ruined the escape’s chances. José Joaquín Rojas protected both López and Enric Mas -3th at the finish- en route to the final climb. And the good legs from Enric and ‘Superman’ gave the Colombian confidence to attack with 4km to go, with no opposition from the other race contenders, and win ahead of GC leader Roglic (TJV) and second-placed Mas.

The Movistar Team thus increases its list of wins to 32 this season -that’s 14 for the men’s outfit in 2021- and no less than 121 Grand Tour stage victories for the Abarca Sports organisation since 1980. Mas and López -who remains 3rd overall behind the Spaniard- now have more than one minute and a half’s advantage for the podium with three days to go, all of them in Galicia. For now, they will enjoy themselves for a few hours after a victory which pays back so many bad moments and suffering for everyone in the Telefónica-backed squad in recent times.

Miguel Ángel López: “It was a long time for me already since I wanted to win again in La Vuelta. It’s been four years since my last success here, and achieving it on the Queen stage makes me so happy. I do this with so much commitment, ambition, and love for my wife and my son. I’m so thankful to my team-mates for their work. We’re only five now in the race, and we’re missing Carlos, Alejandro and Jacobs so much. However, everyone still here puts a lot of work to make up for the losses. It’s been so beautiful to pay the team-mates back for this. The efforts from Imanol, Nelson, Rojillas, Enric… they were magnificent. This means a lot to us. Only those who are here, inside the team, know how hard it is, how much you suffer every day. Without the sponsors, the staff, the soigneurs, sports directors, our manager Eusebio – it wouldn’t be possible. This can’t be about talking and criticising so much all the time. We offered some good spectacle today, and we go back home with this beautiful victory, so happy about the brilliant work done by all of my team-mates. We also knew this day was important with regards to the GC, we had to take full advantage from it and this will keep us more calm before the next few days heading into Santiago.”