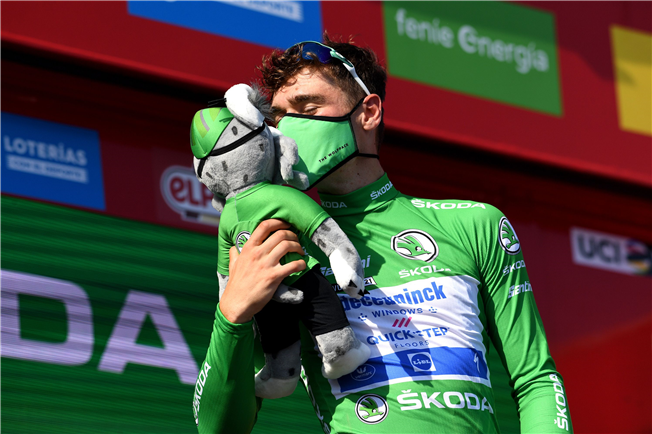 Fabio Jakobsen couldn’t have dreamed of a better birthday present on the day he turned 25. Clad in the green jersey he sports since the opening week of the race, the “Hurricane of Heukelum” made it a hat-trick of victories at the final Grand Tour of the season, in Santa Cruz de Bezana, a small Cantabrian town which welcomed the race for the first time.

The 180km stage wasn’t an easy one, a series of unclassified climbs testing the sprinters. On the hardest of these, with around 50 kilometers to go, several teams piled on the pressure, splitting the peloton, among those dropped being also Fabio. As soon as this happened, the Wolfpack rallied around its leader and clawed back time, helping Jakobsen bridge across inside the final 40 kilometers.

Deceuninck – Quick-Step remained at the front, bringing back the five escapees, and guiding its sprinter through the nervous final part of the stage, where also the GC teams made an appearance due to a brief threat of echelons. Coming out of the last corner, the Dutchman combined physical presence, positioning, timing and speed, and emerged again as the fastest thanks to another immensely huge sprint that gave absolutely no chance to his opponents.

“This victory belongs to my teammates. They brought me back when I was dropped, kept me at the front, worked hard to reel in the breakaway and made sure I was where I needed to be for the final part of the stage, which featured several tricky parts. I am happy I could gift them the victory on this beautiful day”, said an emotional Fabio, the first rider in 15 years to win at La Vuelta on his birthday.

“This time last year, I had no idea if I was going to be a bike rider again. I am extremely grateful to be here, able to fight for victory. I love the adrenaline this sport gives you, I love winning, and I love being part of the peloton and of this great team. To get my third stage here on my birthday, with the green jersey on my shoulders, it’s a dream. I’m over the moon, I really couldn’t be happier”, added Jakobsen after his fifth Grand Tour stage victory.