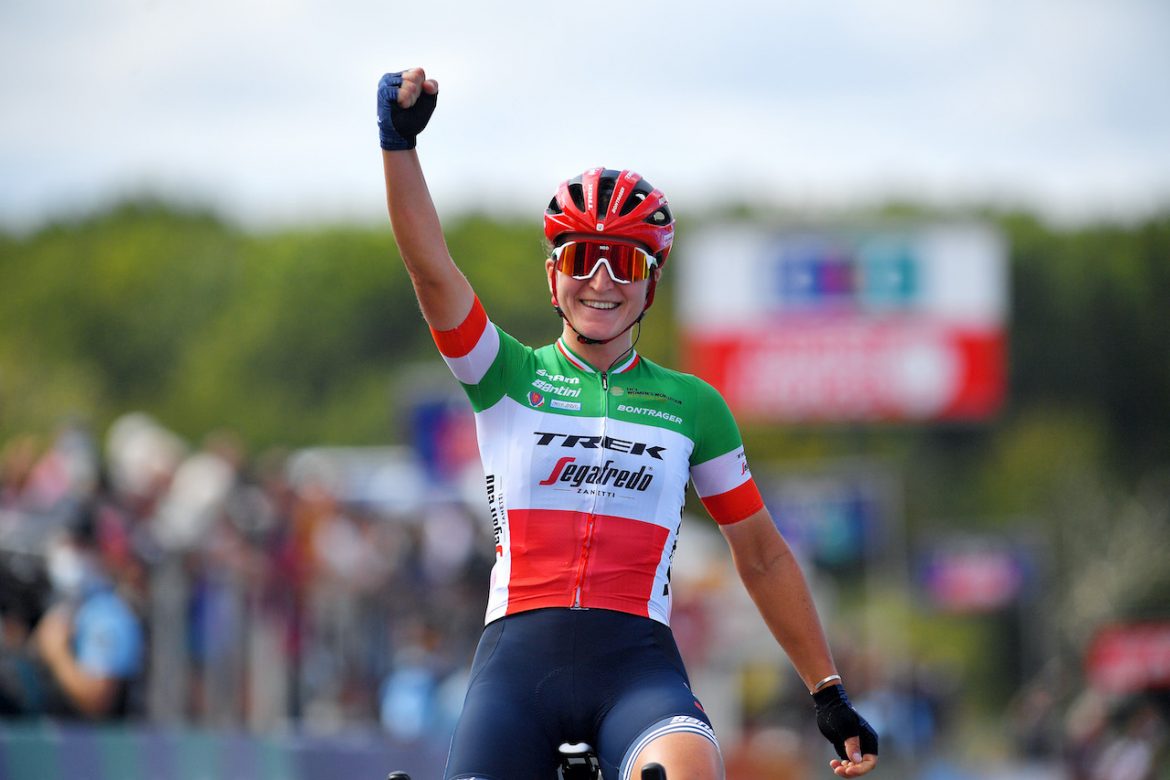 “It is amazing what you can accomplish if you do not care who gets the credit.”

The famous quote from Harry S Truman, the 33rd president of the United States, is fitting for a Trek-Segafredo team who came into GP Plouay ready to defend Lizzie Deignan’s 2020 victory, but with a race plan that included more than one leader – it didn’t matter who, only if a Trek-Segafredo jersey would be first across the line.

“I am very happy and satisfied about today. Plouay is such a great area for cycling; it’s always nice to win here,” said Longo Borghini. “Actually, the team plan worked out really well despite the crash of Audrey (Cordon-Ragot), the Bretagne champion, because we tried to give her a chance for victory here since this is a big race for her.”

The first attack by Longo Borghini with 25 kilometers remaining looked to be a move to set up last year’s winner Lizzie Deignan, a softening of the bunch, and just as Elisa launched, Audrey Cordon-Ragot hit the deck.  It was an ill-timed crash by the Breton, but Longo Borghni was on fire.

“In the end, they asked me to attack and make the race hard, and so I did,” explained Longo Borghini. “Audrey was really strong today, and she cares so much about this race, but she was really unlucky.”
The Italian champ’s attack came after Ruth Winder had just put in a massive effort to reduce the gap to solo leader Alena Amialiusik (Canyon SRAM). It was not the winning attack – yet – a small group was able to come back to Longo Borghini, and then, just after the start of the final lap, a larger chase group that contained Lizzie Deignan rejoined.

But Longo Borghini had more.
“Today, I felt really strong, and I knew I had to go solo because this is my only way to win a race,” Longo Borghini continued. “It’s always a roll of the dice; it’s always hard for me to win, but I managed.”
Longo Borghini’s second attack, 10 kilometers from the line, was the good one.
She jumped away on a climb, and despite a few riders’ attempts to follow, she gradually increased her gap over the next kilometers. On the final uphill that topped out 1.5 kilometers from the line, the gap grew further as the fire went out in the bunch behind.

Longo Borghini had enough time to savor the win – a solo move is a hard way to take victory, but there is no better feeling when it works.

“This is a victory for our team manager Luca Guercilena. I want to say hello to him and wish him luck in his treatment. I think he needs an extra boost of energy, and hopefully, we gave it to him today,” added Longo Borghini.

“Plouay is always a hard race. You don’t really feel it, but you do a lot of altitude meters by the end – the road is always up and down. We wanted to defend Lizzie’s victory of last year, and we did! The plan we had worked out.”
Lizzie Deignan was the first to congratulate her teammate, as happy for her as she would be for herself. Because, with Trek-Segafredo, it’s always a team win.