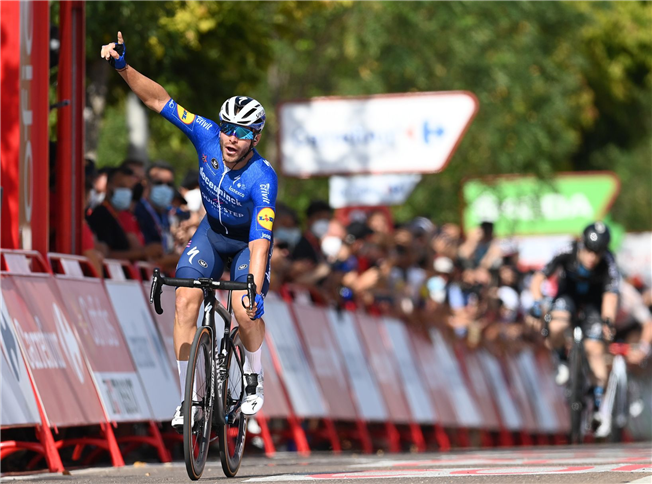 Florian Sénéchal brought Deceuninck – Quick-Step’s 52nd victory of the season after an insane finale in Villanueva de la Serena, where stage 13 concluded. The 28-year-old benefitted from an excellent lead-out from his Deceuninck – Quick-Step teammates – who stormed to the front in the closing kilometers and split the peloton with the flamme rouge looming on the horizon – and delivered a perfect sprint with 150 meters to go.

Victorious in two races since joining the Wolfpack back in 2018, Sénéchal was supposed to launch green jersey Fabio Jakobsen, but the Dutchman dropped from the reduced front group and the Frenchman quickly became the man who carried the hopes of the team. In the last kilometer, Florian waited patiently for the finishing straight and kicked within sight of the line, holding off Matteo Trentin (UAE Team Emirates) for the biggest win of his career to date.

“We had other plans today, but when Fabio shouted on the radio that I should go instead for the sprint, I immediately focused on that, on remaining calm and giving it my best in that chaotic finale. The guys did an incredible job and I’m grateful to them for their immense efforts and for giving me this opportunity. I feel honoured by their confidence and I’m delighted I could repay it today. At the same time, I also want to thank my wife, family and friends, people who, together with my team, always supported me and believed in me. I still don’t realise what this win means, it’s just crazy”, said an elated Florian after racking up Deceuninck – Quick-Step’s eighth Grand Tour stage victory of the season.

Fabio Jakobsen, who extended his lead in the points classification after taking the intermediate sprint in Don Benito, remained upbeat after the stage: “This is cycling, you can be the main favourite but things don’t always turn out the way you wanted. The team did a perfect lead-out, but the legs were full of lactic acid and I could see that before the last two kilometers, so I just told Florian that he should sprint and I’m happy that he finished it off for. I’m sure other opportunities will come and we will go for them.”