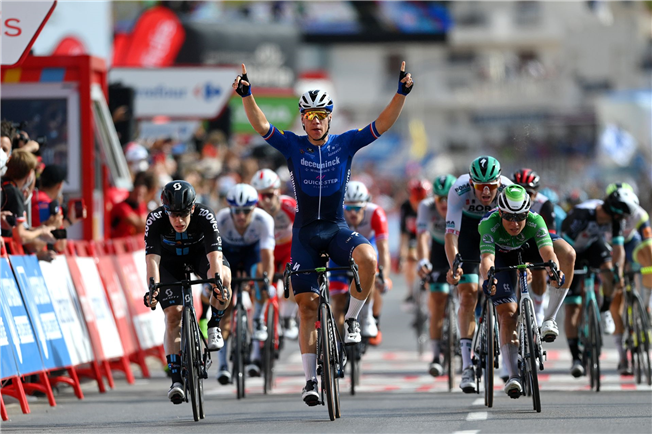 For the ninth time in the last ten years, Deceuninck – Quick-Step made it 50 victories in a season, taking its all-time tally to over 830 wins, after Fabio Jakobsen produced another flawless sprint in a fast and hectic finale at La Vuelta, which Saturday afternoon took the peloton through the region of Murcia.

Completely flat, the stage wasn’t as straightforward as many had wished, due to the presence of the crosswinds which made a brief presence inside the final 40 kilometers, enough to kick-start a fierce fight for positioning at the front of the group which then easily swallowed the breakaway before hitting the coastline. The tension continued to be palpable, but no significant splits occurred, and the peloton entered as one in La Maga del Mar Menor.

Josef Cerny and Bert Van Lerberghe drilled the pace before making way for Florian Sénéchal, who did a monster lead-out until with 150 meters to go. As soon as the Frenchman stopped, Fabio Jakobsen opened his sprint and showed everyone a clean pair of cleats, comfortably sailing to his second win at this edition, one which moved him back to the top of the points classification.

“To double up here means a lot to me. Two years ago, I took two stages at my Vuelta debut, so to repeat that feat now is just amazing! We had some hectic final 40 kilometers, with the GC teams really nervous as they jostled for position, but I had a fantastic team around me all the time and they did a great job to keep me at the front.”

“In the closing kilometer I lost my teammates a bit, but I remained calm and confident in my legs and the speed I could generate. Florian did a great job, and just as we came out of the last corner I burst clear and finished it off. I’m excited and grateful to be here, a double stage winner after the opening week. I am also delighted to have green again, it’s the jersey every sprinter dreams about, and at the same time, a nice reward after suffering in the heat and on the climbs during Friday’s stage”, added the first Dutch rider to amass four La Vuelta stage wins before turning 25.