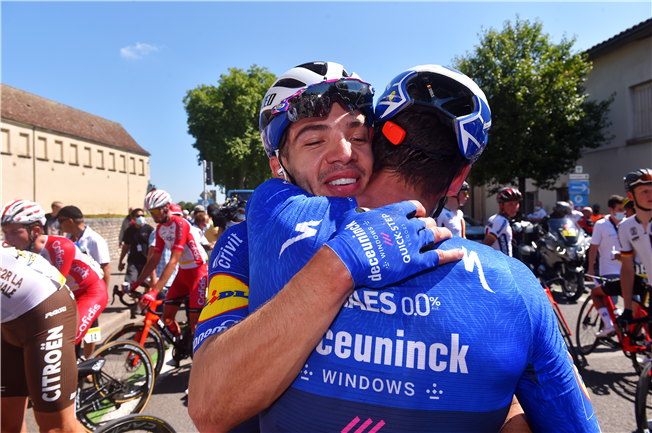 Alvaro Hodeg became the first South American rider to put his name on the winners’ list at the Grote Prijs Marcel Kint, capping off his Deceuninck – Quick-Step teammates’ excellent work as he claimed his third success of the season in Kortrijk after a close sprint.

Featuring some cobbled sectors and short hills, the 196.3km race was controlled by several teams, including the Wolfpack, who made sure of keeping the five escapees on a tight leash before reeling them in on the final lap, with around ten kilometers to go. Deceuninck – Quick-Step stormed to the front with Tim Declercq, who put the hammer down and stretched out the field before a crash that occurred with the flamme rouge in sight disrupted the sprint trains, leaving only a handful of people in contention for victory.

Alvaro Hodeg had Shane Archbold for company, and last year’s New Zealand champion turned himself inside out for the Colombian, keeping the speed high and delivering a tremendous lead-out before peeling off the front 200 meters from the line. As soon as this happened, Hodeg kicked out and despite a charge of Tim Merlier (Alpecin-Fenix), he managed to hold off the Belgian for our team’s 49th victory since the start of the year.

“I want to start by saying a massive thank you to the team for all their effort and for bringing me in the best position when it mattered. We knew we had to be in the front for the last four kilometers and the guys did just that, which turned out to be extremely important, especially after that incident. Then Shane did a huge pull and coming out of the last corner I sprinted as fast as I could”, an elated Alvaro said. “I am so happy I could take the victory. I am leaving the team at the end of the season, as everybody knows, but I am motivated to give my best until the very end and get more solid results, and that’s what I intend to do in the next races.”