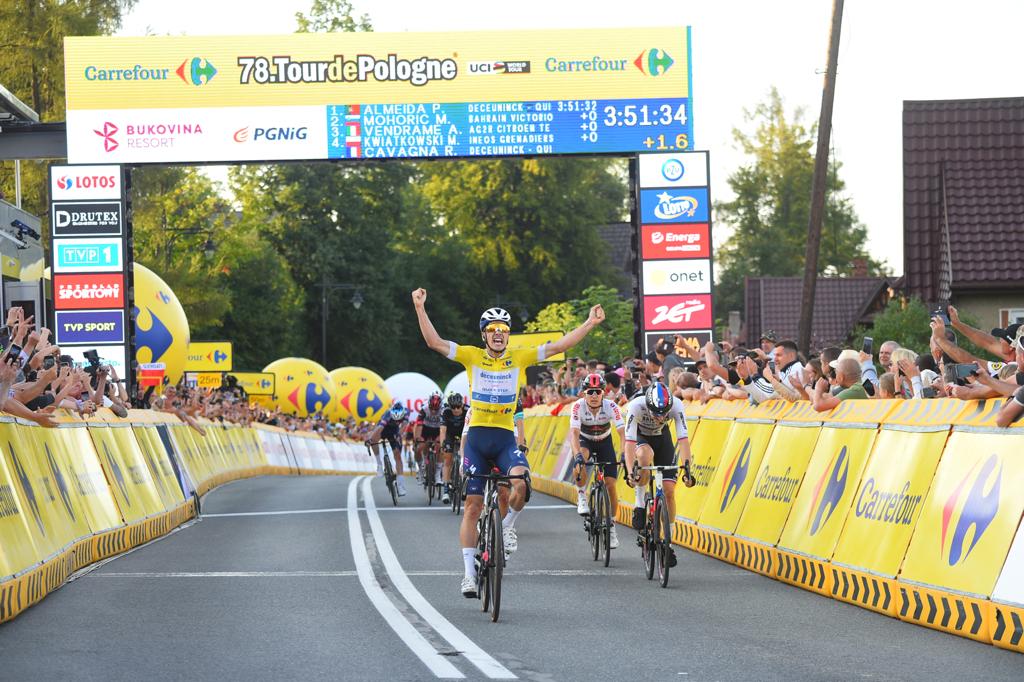 Joao Almeida wins the queen stage by crossing the finish line in Bukovina in the yellow jersey. The young talented Portuguese extends his GC leadership after today’ s masterpiece sprint.

The fourth stage of the 78th Tour de Pologne UCI WT was a tough one starting in Tarnòw in front of the headquarters of Grupa Azoty, one of the sponsors of the race, and finishing in Bukovina Resort in the heart of the Tatra Mountains.

A four-man breakaway including Lawrence Warbasse (ACT), Attila Valter (GFC), Edward Theuns (TFS) and Marco Canola (GAZ) set off immediately and during the stage it reached a considerable gap of 3.30 minutes to then be slowly absorbed by the peloton with less than 20km to go.

Once also the last two fugitives, Attila Valter and Marco Canola, had been caught with just a few kilometres to go, the peloton got organised for a pretty well-known finish of the seven-day Polish race. This is when a number of attacks took place, including the one that saw Remi Cavagna go off on his own, followed shortly by Paterski who was unable to keep up.

At that point it was another Deceuninck – Quick-Step rider, Mikkel Honoré, who tried to go clear and continued his run towards the finish line until the peloton caught up with him and the sprint took shape.

“It was a hard stage with all the ups and downs. The team really helped me a lot and I have to thank them for it.” said stage 4 winner, Joao Almeida. “I tried to anticipate a little bit, then Mohoric attacked. I followed him and thought he went a little bit early. I knew he probably would have paid the effort and it was the moment when I gave everything, so I did my sprint and passed him. The attack of Cavagna and Honorè in the final was a good move as they forced the others to close the gap and work more. That helped me a lot. Tomorrow it’ll be another hard stage, especially in the final circuit. It won’t be easy but we’ll do our best to be in a good position for the time trial. Then, it’ll be just me and my legs.”