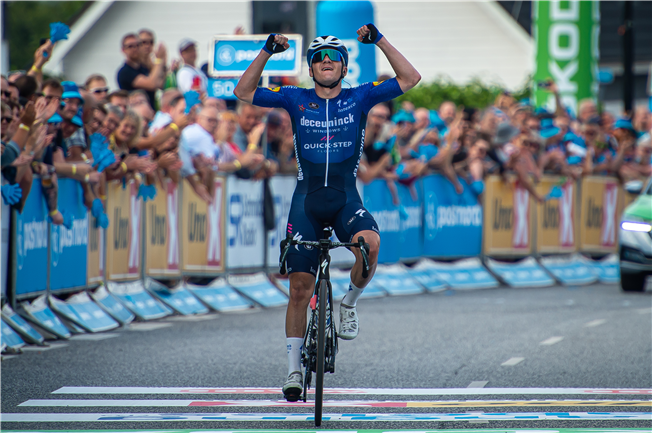 Remco Evenepoel delivered another massive show of strength on the demanding roads to Vejle, which once again took in a series of short but hard climbs, pitching up to 15%, that reduced the peloton until the moment only 30-odd riders were still part of it with 50 kilometers to go. Deceuninck – Quick-Step had Evenepoel, Olympic Champion Michael Mørkøv and Jannik Steimle in that group, and it was the 21-year-old winner of the Belgium Tour that attacked, drawing with him four other riders.

It was a short-lived action, due to the lack of collaboration, but Remco kept on trying and his powerful accelerations further reduced the group, before he went clear again, this time with three men for company. It looked like that would be the winning move, but things changed in just a few seconds, after Evenepoel misjudged a corner which saw him lose contact with the other attackers and return to the peloton.

The Wolfpack stayed true to its spirit and didn’t give up, Mørkøv and Steimle exchanging turns at the front of the group as they began chewing into the leaders’ advantage. The amazing effort paid dividends when the trio were caught inside 20 kilometers to go, but Evenepoel wasn’t content with just being part of that group and soon attacked again, this time in an all-or-nothing move that came on uphill part marking the start of the three local laps still to be covered.

Riding everyone else off his wheel, Remco went into time trial mode and increased his margin over the chasers, unfazed by the hard hills that made for a demanding finish. By the time he arrived at the line, after lapping the whole peloton, Evenepoel managed to put one minute and a half between him and his nearest opponents, a result that brought also the leader’s jersey which now sits firmly on his shoulders.

“We knew it was going to be a hard race, so we remained attentive and always at the front, as the peloton was expected to split at some point. As you could see, I tried several times, and after one of these attacks I made that small mistake, but luckily, I had an amazing team around me, with Jannik and Michael burying themselves for me in order to catch the breakaway. In the final kilometers, I knew from Michael that a steep part was about to come and that’s where I attacked and made the difference.”

“The GC fight is not over yet, but I hope to have the feeling of today also in the remaining stages and take the jersey home. I was extremely motivated to win seeing how much the team worked for me and I’m glad of the way it panned out. At the same time, this first victory in a road stage after a very hard period means a lot to me. I had a lot of ups and downs, but I remained patient and confident, and the reward came today”, explained Remco after his perfect day in Denmark.