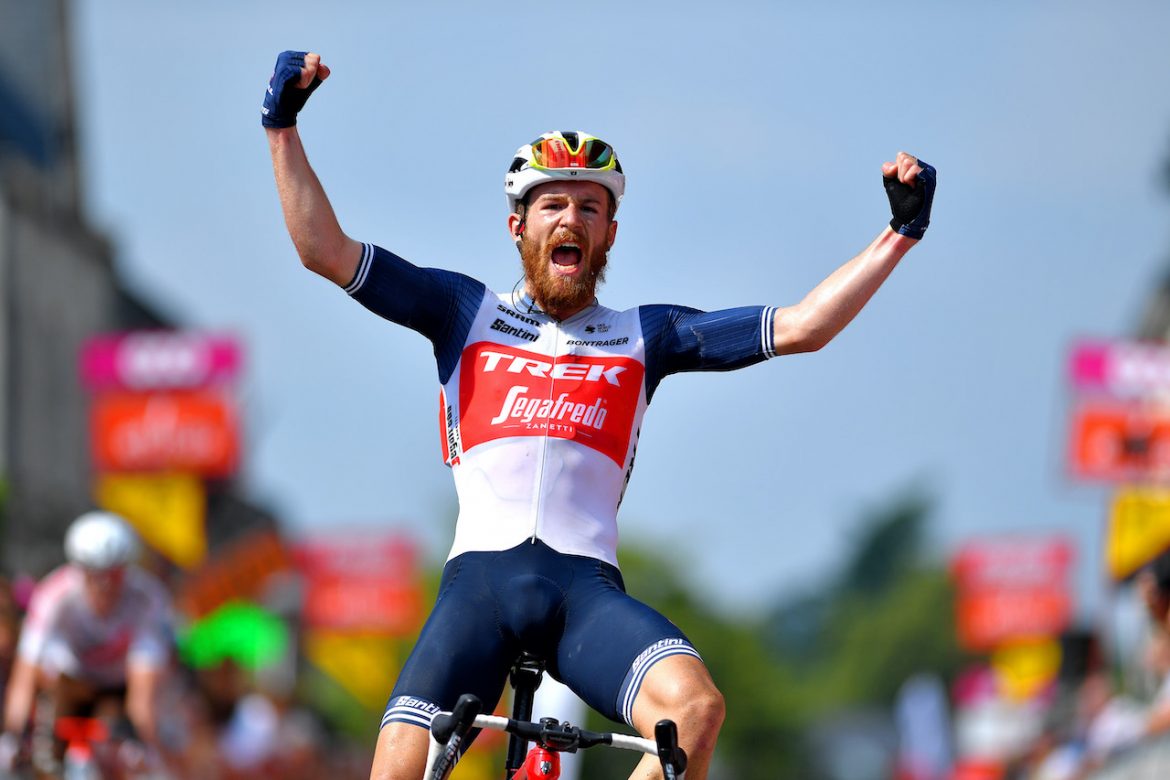 When a five-rider move with teammate Juan Pedro Lopez was caught in the closing kilometers of Stage 3 in the Tour de Wallonie, Quinn Simmons quickly countered.  His attack was one of many in an action-filled ending, and this time, it was successful.

Stan Dewolf (AG2R Citroën) tagged the move by the young American, and the pair worked together to hold off a small chase group.  In an uphill finish, Simmons did not have to play cat-n-mouse. He simply unleashed his sprint early and Dewolf fell off his wheel, giving Simmons a long-awaited and very sweet first pro win.

“It’s my first pro victory, and first sure the first pro win is a big one,” said Simmons. “It’s been a year and a half now as a pro, and to finally make it happen is a big relief. It took a while, and I was starting to lose faith in myself. But you saw how the guys rode today – it was perfect. Everyone did his job pulling hard from the beginning, and Juanpe (Lopez) was super strong in the finale. It’s been quite a while since I played a finale; the last time I won a race was the World’s in Yorkshire two years ago. It’s nice to get the emotion back.”

How it played out
The hills arrived in the Tour de Wallonie and Trek-Segafredo, after patiently waiting through two flat stages, was ready to play.

The team kicked off the action in the final 50 kilometers, pushing the pace over the climbs with Jakob Egholm, Antonio Nibali and Alex Kirsch each taking his turn setting a harsh pace.

Under the Trek-Segafredo force, it was not long before the three-man breakaway was reeled in. Simmons pulled the first blow with a searing attack over the top of a climb with around 27 kilometers to go, drawing out a group of seven riders, including teammate Juan Pedro Lopez.

The reaction was swift from behind, and within a few kilometers, the peloton caught the escape group, and it set off a series of attacks that continued to the end.

“We took control 60k out almost,” explained Simmons. “Alex (Kirsch) really ripped it on the climb, and then I had Juanpe with me to attack that first time. When we got brought back, we thought it was almost over, but the whole team was super strong; we were almost in every move.”

On the penultimate climb, a group of five moved clear with Juan Pedro Lopez again in the mix. It looked likely it would be the winning move with seven kilometers to go, but still, a group came back.

And then Simmons jumped.

“You saw in the finale we had both Juanpe and me there, so we had two cards to play, and he was going super strong on the climbs. And with two of us in the finale, you’d better not lose,” added Simmons. “I was able to make it on the downhill, and I almost forgot how to play a finale; it’s been nearly two years since I did it right.”

Belgian Dewulf was able to go with Simmons, and the two opened a sizeable gap in the final three kilometers to four disorganized chasers.  The win would come from one of the two leaders, and Simmons was confident.

“When it’s a sprint after this many climbs, I am pretty confident,” Simmons said. “When it’s on the flats, I don’t stand a chance, but this is more my kind of sprint, so once the two of us were there, I knew it was game over. It’s never easy to win, but with the way the team rode and set it up for me to do my job was really straightforward. Thanks to the team, it was as easy as it could come.”