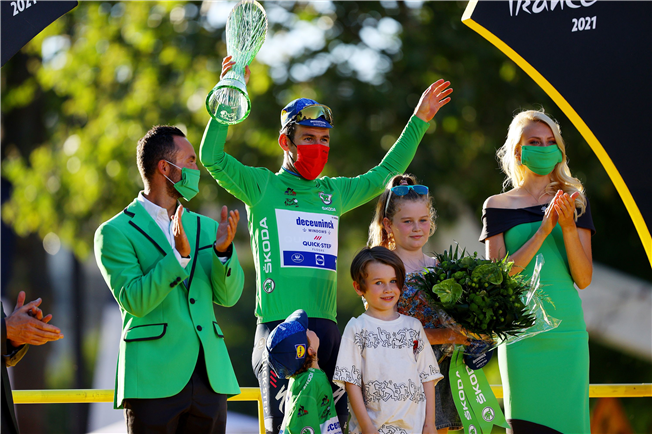 Mark Cavendish capped off one of the most remarkable comebacks in sports history by taking home the Tour de France green jersey on the iconic Champs-Élysées at the end of an incredible three weeks that saw him score four wins and equal Eddy Merckx’s record of stage victories.

Coming into the race for the first time since 2018, the Manxman hit the ground running early, on stage 4, when he prevailed on the uphill finish in Fougères, before repeating just forty-eight hours later in Châteauroux, the site of his first ever Tour de France win. Valence and Carcassonne followed suit, by which point the 36-year-old had already asserted his dominance over the points classification.

Shepherded on the mountains by his Deceuninck – Quick-Step teammates, who turned themselves inside out to help him make the time cut, Cavendish survived the Vosges, the Alps and the Pyrenees and arrived safely in Paris, where he sprinted to a fifth top 3 finish at this edition and wrapped up the green jersey for the second time in his career, a decade after his first triumph in this classification.

“I’m very happy. One month ago I wasn’t supposed to do the Tour de France and now I am here, after three weeks that will live long in memory. I never imagined I would be again wearing green on the Champs-Élysées, but here I am, thanks to the amazing riders and staff of Deceuninck – Quick-Step. They were a big part of this success and together we’ve been through so many emotions.”

For me, to be back at this race that I love so much and do what I did was a dream. I am incredibly happy that I have my family here, as I haven’t seen them in the last five weeks and it feels great to share with all of them these unforgettable moments”, a smiling Mark said after a sparkling race that strengthened his legacy as the best sprinter in the history of the Tour de France.

One of the few squads to arrive in Paris with all eight riders, Deceuninck – Quick-Step wrote history by becoming the first team in the last 45 years to be in possession of the green jersey from the first until the last stage. World Champion Julian Alaphilippe held it for three days following his superb opening day victory in Landerneau, before Cavendish took it over at the end of stage four.

The Wolfpack – which continues to be the most successful World Tour team of the season – leaves the Grande Boucle with the points jersey, a day in yellow, five stage victories, a total of nine podiums and Mattia Cattaneo’s solid 12th place in the general classification, made even more impressive by the fact it was the Italian’s first presence here.