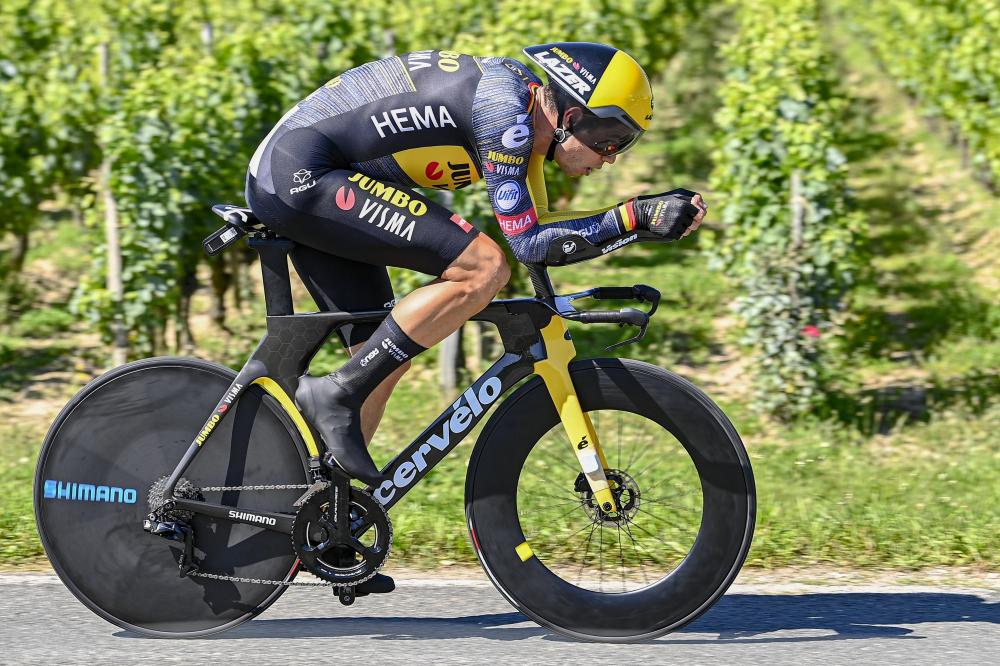 Wout van Aert has won the twentieth stage of the Tour de France. The Belgian rider was the fastest in a time trial over thirty kilometres. It meant his second stage in this edition of the Tour. Jonas Vingegaard rode to third place.

The fact that Van Aert was riding a good time trial became clear through his intermediate times along the road. Van Aert was faster than the competition at both the first and the second waypoint. At the finish he had an advantage of twenty-one seconds over number two Kasper Asgreen. Vingegaard consolidated his second place in the general classification thanks to a strong time trial.

For Van Aert it is his seventh victory of the season. He took Team Jumbo-Visma’s 2021 victory tally to twenty-three.
“It was one of my big goals in my career to win a time trial in the Tour de France”, Van Aert said. “It’s the biggest race of the year. I have been looking forward to this time trial for a long time and I really worked towards it in recent days. I am very happy that it worked out. Compared to the previous race against the clock, this was a faster time trial. That was to my advantage. When I saw the classification riders’ times from the hot seat, my hopes of winning began to rise. It was a perfect day.”

Van Aert is proud of the way his team continued to fight after a difficult start. “It was not an easy Tour for us. We kept fighting and that resulted in three stage wins and a second place for Jonas in the general classification with one stage to go. We can all be very proud of that.”

Sports director Merijn Zeeman also spoke of a perfect time trial for Van Aert. “We have invested a lot of time and effort in Wout’s time trial. Mathieu Heijboer put a lot of energy and time in it. Think of materials, posture, position and wind tunnel tests. It all comes together in this great performance. Wout was clearly much better than during the first time trial. He has really grown and become better in this Tour. I expected this from Wout. We knew he was one of the top favourites today and that he would be satisfied with nothing less than the win. The fact that Jonas finished third today makes it a dream day.”

Vingegaard was proud of his time trial which consolidated his second place in the standings. “It’s great to be second in the GC one day before Paris. I’m really proud of that. It was a difficult course, but I felt good on the road. After Primoz abandoned in the first week, I took over from him. I’m happy with the way I did that.”