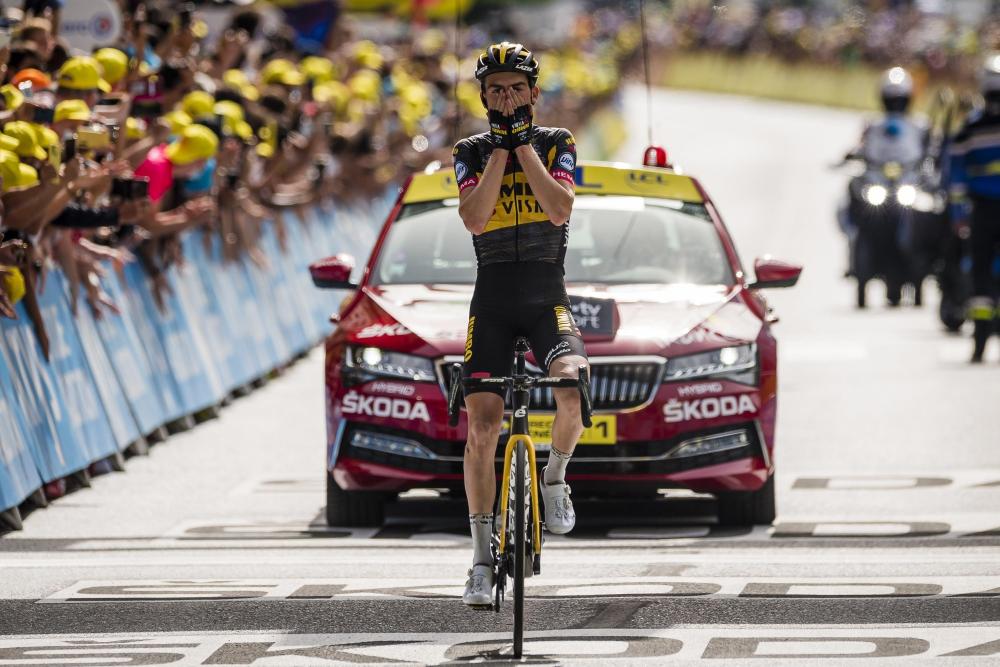 Sepp Kuss has won the fifteenth stage of the Tour de France. The rider of Team Jumbo-Visma escaped on the final climb from the break of the day, which also included Wout van Aert and Steven Kruijswijk. In his hometown, the American rode solo to his first win of the season.

Van Aert, Kruijswijk and Kuss represented Team Jumbo-Visma in the large leading group, while Vingegaard was assisted by Mike Teunissen in the reduced peloton. Vingegaard was again very strong and moved up a place in the rankings.

Van Aert did an excellent job for Kuss in the descent of the Port d’Envalira. On the final climb Kuss attacked. Alejandro Valverde continued to put pressure on the descent towards the finish, but couldn’t prevent the American from taking the win.

In the descent of the final climb, Van Aert waited for Vingegaard to cross the finish line in Andorra la Vella together with the majority of the general classification riders. Van Aert was also allowed to take the podium after the finish, just like his American teammate. The champion of Belgium received the ‘prix de la combativité’.

Kuss had a hard time getting his mind around the fact that he had won his first Tour stage. “It’s really unbelievable. I can’t describe it. I was really suffering this Tour. Today the stage finished in my hometown and therefore I was very motivated to go for the stage win. Finally I found my good legs and I could finish the job. My friend and her family stood on the final climb to cheer me on. I know the last climb a bit, but haven’t ridden it often. It’s a very tough climb. My team did a fantastic job today. Wout was ahead of me in the whole valley. If a champion like that works for me, then I have to finish it off too. I’m really happy that I won here.”

Kruijswijk was pleased with the team tactics. “We wanted to go for the stage win today, but also protect Jonas. If we made sure we were in front of Jonas, we could always wait. In the end it all fell into place. The ride over the Ventoux and this stage victory ensure a high morale in the team. It says something that, despite the fact that we are only racing with five people, we can still race like this. We’re in good shape. It is a pity that we didn’t succeed in our main goal with Primoz, but we got back on track.”