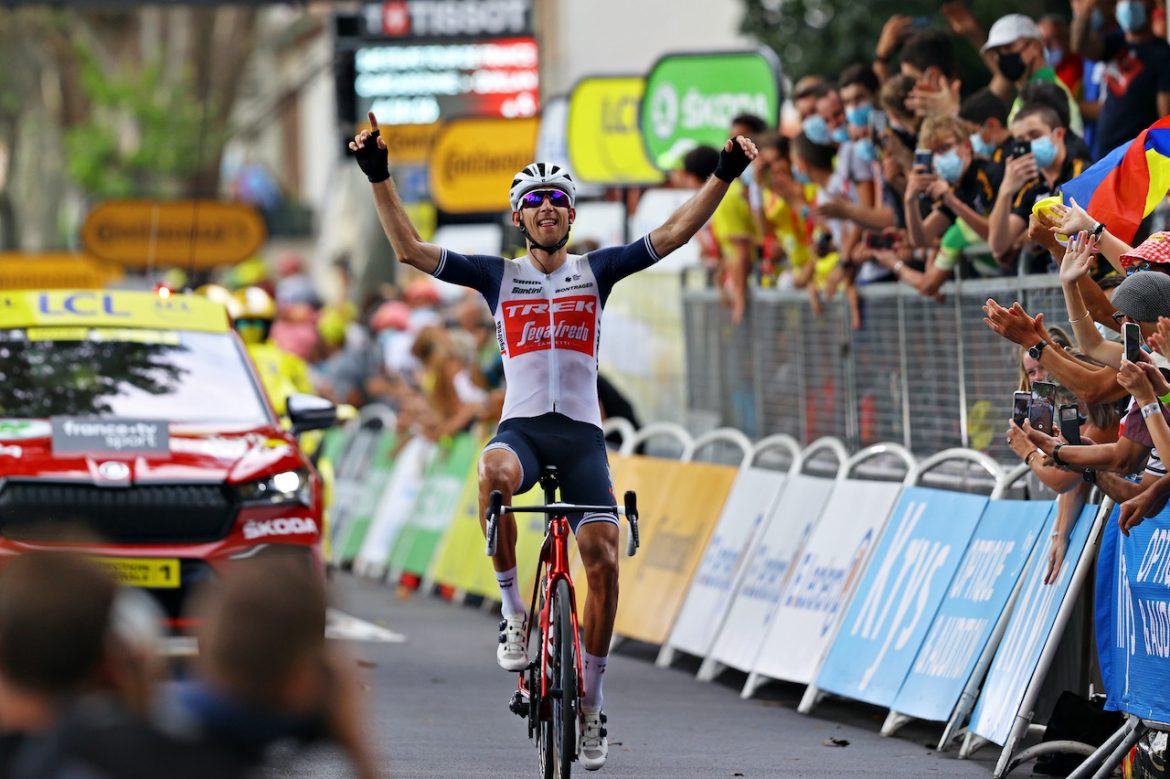 Bauke Mollema and Trek-Segafredo finally found just reward for their efforts in breakaways in the 2021 Tour de France.  The team entered this year’s race targeting stages, and the team focused everything on getting in breakaways. Still, to achieve such a victory in the Tour from a breakaway, something so highly sought by every team is never easy.  The only way is to try, try, try.  And if you fail, try again.

It was the mantra of the Trek-Segafredo, who fell short of victory in Stage 7 with Jasper Stuyven’s second, and the Ventoux stage with 2nd and 3rd places, but never gave up.
Bauke Mollema, a consistent diesel engine with no quit, finally found the moment in Stage 14, attacking the breakaway with 41 kilometers remaining and soloing to a sweet victory.

“This is super nice; it’s amazing to win a stage again,” said Mollema. “I am super happy. The team was riding really aggressively the last week; we were really going for the stage win; we are not in the GC anymore, so stages like this, we really wanted to be in the break.

“Big thanks to the guys, especially at the start of the race; they did a great job. We didn’t miss any break – yeah, this is super nice for the team.”

Stage 14 was identified as a day for a breakaway to succeed, resulting in a big fight by all teams to get into the move, making it especially hard to be there.

“It was a super hard day and took 80-90 kilometers before a break finally went. The team did amazing – we didn’t miss any move at the start of the race. We were always in the front with 4-5 guys,” said Mollema, heaping praise on his team.

“It was a nice group with a lot of strong guys, but we were not working together so well. A few guys were not turning, and I was feeling good, so I just thought, let’s go from far. I was 40 kilometers alone.”
A solo 40-kilometer ride, 14 races into the Tour, is not a cut-n-dried recipe for glory, even for a diesel like Bauke.  There was more to his win, too.

“When I looked to the roadbook at the beginning of the Tour, I knew this Stage was a good opportunity for the breakaway, and when it goes up and down all day, and a hard climb at the end with a tricky downhill, I knew it was good for me.

“A few days ago, I checked the last 50-60kms of the course on Google maps, so I knew more or less what to expect. I knew there was a tricky downhill, and after that, I was waiting for the right moment to attack. I felt good, and I knew I could do a long solo to the finish.

“The steep part of the last climb, it was important to go full gas and not lose too much, and once I had more than 50 seconds on the top, I was pretty sure I was going to make it,” said Mollema.

“With the team, it was a big goal to win a stage. We have a lot of guys who are able to do it. You need the legs at the right moment and perhaps to make the right decisions in the race sometimes. Jasper Stuyven got 2nd already, and me and Kenny Elissonde were 2nd and 3rd. You need to pick the stages; some you go a little bit easier – the last two stages I didn’t spend too much energy and tried to recover from the Ventoux stage – but today I had motivation to go for it. I tried to do everything well, everything possible from the night before already. You are thinking more about the details – like the nutrition in a hard stage like this, which can make a difference in the end.”
It was his second Tour victory, and the question always comes: which means more?

“It hard to compare to 2017 since that was my first win in the Tour, so that was maybe more special, but this one is also super nice, especially after a long solo like this,” answered Mollema.

“I am not a rider that wins 5 or 10 races every year, so every win is special for me, especially to win in the Tour.  And to win a stage again four years later is incredible.”