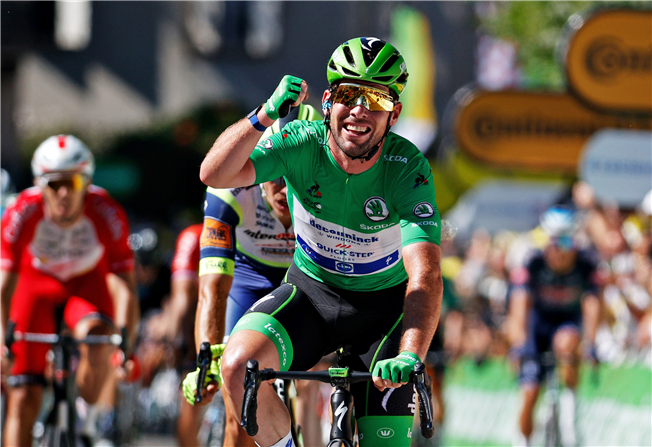 Mark Cavendish dashed to a resounding victory after producing a perfect sprint in the scrappy last kilometer of Friday’s 219.9km stage and tied a record that had stood for 46 years, since Eddy Merckx captured his last win at the race, in Auch, some 170 kilometers from this edition’s stage 13 finish location.

Carcassonne, the town that became famous centuries ago for its role in the Albigensian Crusades, was the site of the 36-year-old’s incredible feat, who dominated again the field after another sensational job by his Deceuninck – Quick-Step, on one of the longest and hardest stages of this edition. The day had everything – from strong winds and some tricky, undulating roads to a tense battle between the attackers and the bunch and crashes that took their toll on the peloton.

Tim Declercq was among those to hit the deck in a massive pile-up with 60 kilometers to go, which meant a quick change of plans for our team, who immediately sent World Champion Julian Alaphilippe and Dries Devenyns to take over the reins at the head of the group and peg back the late attackers. Kasper Asgreen and Mattia Cattaneo then swept to the front inside the final ten kilometers, keeping the green jersey well positioned as the peloton tackled another section of exposed roads that made things even more nervous.

Under the flamme rouge, Davide Ballerini pressed on so hard that he opened a small gap which forced the others to close with 600 meters to go. Tucked on the wheel of Michael Mørkøv (who would go on to finish runner-up from the lead-out), Cavendish waited patiently for the last 100 meters to hit out and blast past all his rivals with another hugely impressive sprint that saw him let out a massive roar as he crossed the line and etched his name in the history books.