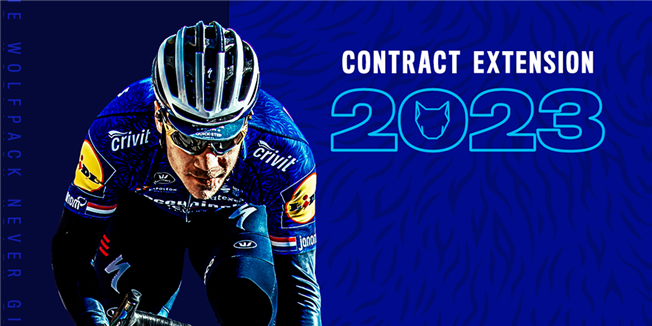 Fabio Jakobsen made an emotional comeback at this year’s Tour of Turkey, after a long and hard recovery road he embarked on since his accident at last year’s Tour de Pologne.

After helping his teammates, and especially Mark Cavendish to four stage wins in Turkey, Fabio said this was the biggest victory for him and an important step in his journey. Jakobsen, who so far since turning pro has scored 18 victories for the Wolfpack – including a brace of La Vuelta stages at his Grand Tour debut and back-to-back wins at Scheldeprijs – will take the next steps of his journey with Deceuninck – Quick-Step after agreeing to stay with the team until the end of 2023.

“I’m so satisfied to continue with the Wolfpack. I’d like to thank Patrick, the staff and all the sponsors for their fantastic support. I’m looking forward to the upcoming two years, to get back to winning races with my teammates, step by step. Right now, I’m in Livigno, preparing for my next goals. I’m grateful for where I am now and for having such an amazing team around me, a team that supported and helped me develop since turning pro in 2018, and I’ll continue to work hard to achieve my goals”, said Jakobsen with a big smile.

“To see where Fabio comes from, it’s just a miracle. Step by step he’s making progress and we’re super happy to have him with us for two more years. Fabio has a lot of talent, has skills and ambition, and we’ll continue to work towards the next races together. He’s been through a lot, but he always had the team behind him and that will never change. In the past he beat some of the fastest sprinters in the world in some of the biggest races, and we are confident that one day he’ll be able to raise his hands again”, added Deceuninck – Quick-Step CEO Patrick Lefevere.