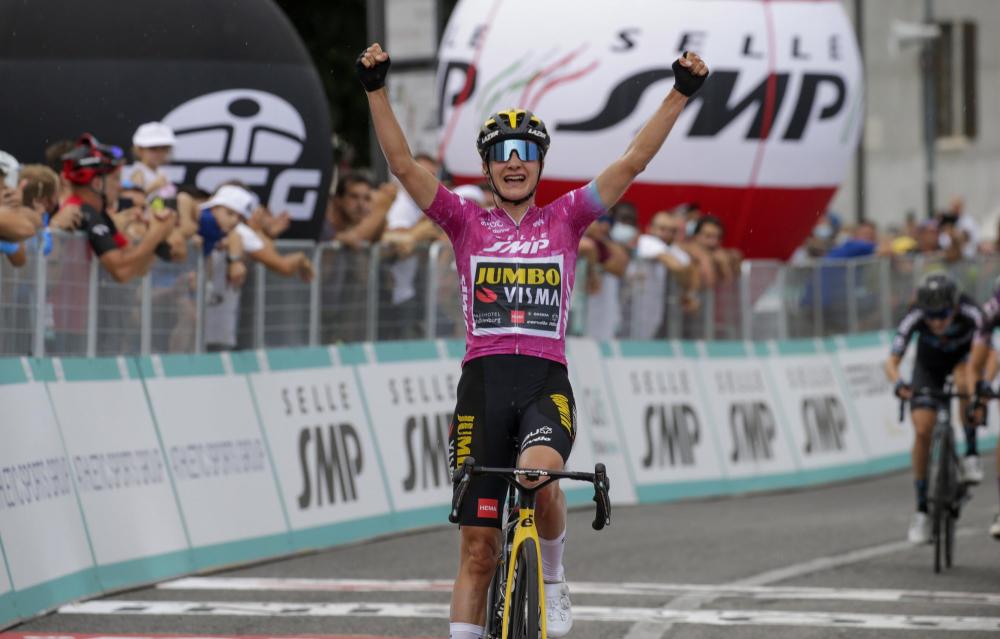 Marianne Vos has won the seventh stage of the Giro Donne. On the hilly finish she sprinted out of everyone’s wheel. The victory in Puegnago Del Garda is the thirtieth victory for Vos in the Italian stage race.

Jumbo-Visma Women started the stage with a lot of ambition. Riejanne Markus, for whom this region is a permanent training base, was in a leading group. Together with her breakaway companion, she was unable to stay away from the peloton. The course took the riders on six local laps with a hill of the third category as the main obstacle.

In the last ten kilometres, Vos positioned herself attentively in the front of a group of favourites for the day’s victory. The Dutch rider initially parried an attack by the Italian champion Elisa Longo Borghini. In the final metres Vos accelerated. This acceleration proved too powerful for Longo Borghini and Anna van der Breggen. Vos clinched a stage victory in the Giro Donne for the thirtieth time in her career.

“The Giro is a special race for me”, Vos said with a smile. “The fact that I can win here for the second time this week is very nice. In the Giro every day is a new day and you try to focus on that. It’s hard to comprehend that this is my thirtieth victory”, the modest Vos said.

“I always feel good in the Giro. The atmosphere around this race is very special. I am happy that I can share this success with my teammates. Seeing how they sacrifice themselves for me inspires and motivates me every time. That is very special. This is a beautiful victory”, the wearer of the points jersey concluded.

Sport director Marco Postma was impressed by Vos’s daring feat. “A beautiful victory for Marianne. It is her thirtieth Giro victory in her career. I’m speechless. This really feels like a team effort. The team supported Marianne the whole day so she could start the final in the best possible conditions.  Marianne’s last kilometre was fantastic. Stage victory number thirty, I can only say this is very impressive.”

It is the fourth victory of the season for both Vos and Team Jumbo-Visma Women.