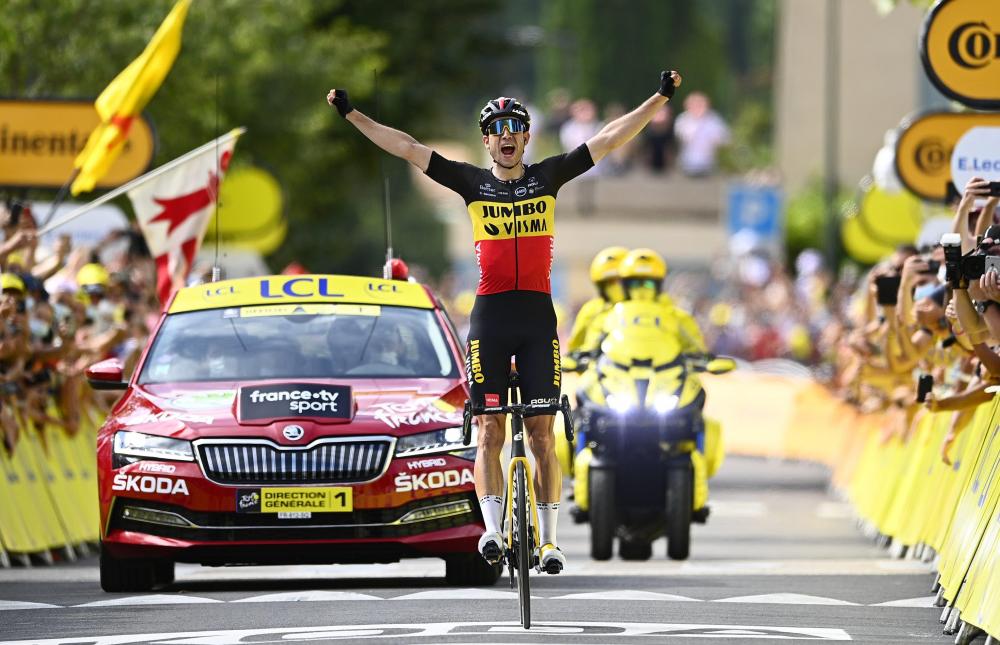 Wout van Aert has won the eleventh stage of the Tour de France in an impressive way. The Belgian of Team Jumbo-Visma was the strongest in the difficult stage that went over the Mont Ventoux twice. After an impressive solo, Van Aert claimed the victory.

The Belgian national champion went full steam ahead after his second place in yesterday’s bunch sprint. He tried, after many efforts in the beginning of the stage, to get to the front of the race. In the descent to the foot of the first climb of the Mont Ventoux he joined the leaders, and subsequently showed his rising form.

On the second ascent of the ‘Giant of the Provence’ Van Aert showed what he was worth. He dropped his breakaway companions and rode to the summit on power. In the descent he did not have to worry about his chasers anymore and a few kilometres from the finish he knew that the victory would be his. In the wake of Van Aert, Jonas Vingegaard also made a good impression. The young Dane moved up to third place in the general classification.

For Team Jumbo-Visma it is the twenty-first victory of the season. Earlier this season Van Aert won two stages in the Tirreno-Adriatico, the classics Gent-Wevelgem and Amstel Gold Race and the Belgian championship. This takes his victory tally to six this season. It is the fourth Tour stage Van Aert has won, after previously having won stages in 2019 and 2020.

“I am speechless”, Van Aert said after his one-man show. “I never dared to dream at the start of the Tour that I could win this stage. Yesterday I suddenly felt I wanted to go for the stage win today as well. I asked the team if I could fight myself in the breakaway of the day. This might be my best victory ever, because the Mont Ventoux is one of the most iconic climbs in cycling. I believed in it along the way and with faith anything is possible. The support was also overwhelming. It was an honour to ride up the Ventoux in the national jersey.”

Van Aert had a difficult preparation for the Tour. “It was difficult for me to start this Tour at my top level because of the operation on my appendicitis. And we had so much bad luck in the first week. With Primoz Roglic we lost our leader and with Robert Gesink our super-domestique. Today we have unfortunately also lost our experienced Tony Martin. Fortunately, everything fell into place in the final. It is a matter of keep going and being able to make the switch every time. This only motivates me more. I’m going to keep helping Jonas, just like the whole team. He is very strong.”

The stage started with a huge disappointment for the team of manager Richard Plugge. Tony Martin crashed hard and unfortunately had to abandon the race. After a medical check in hospital it was announced that the German did not suffer any broken bones. He was extensively stitched and bandaged for his wounds.