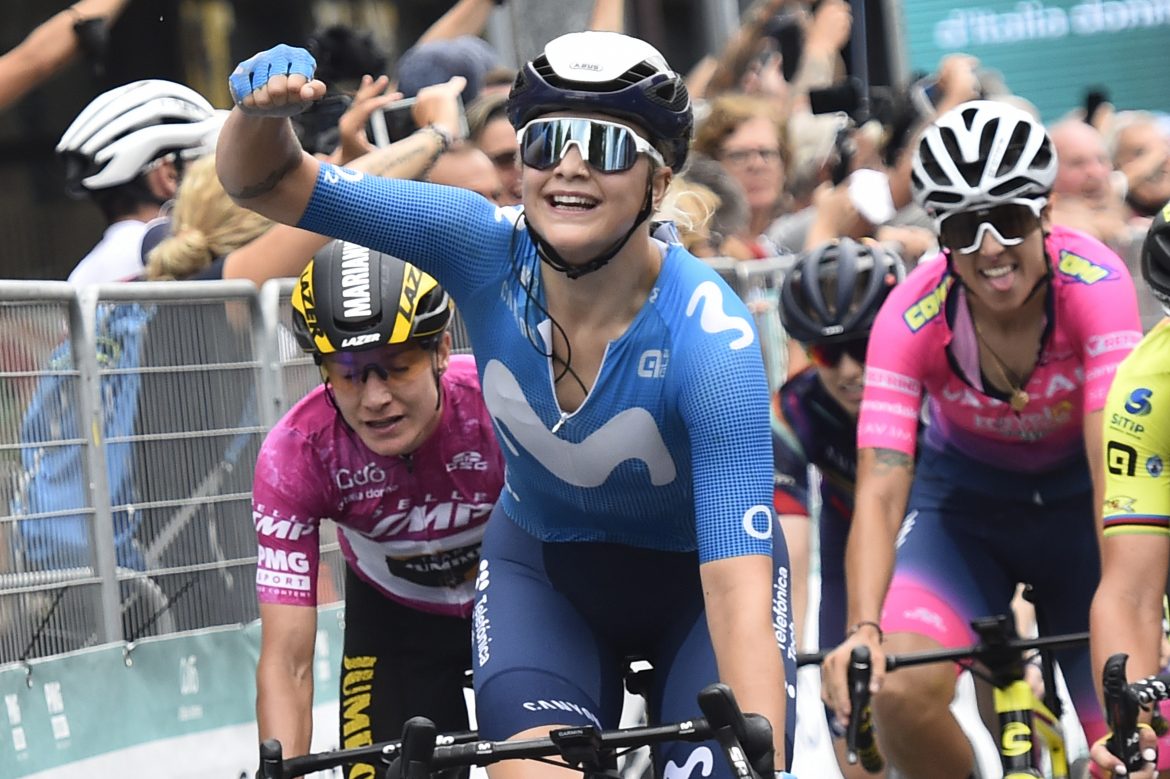 Dane claims in Colico, next to the Lago di Como in Lombardy, the Movistar Team’s first-ever success in the Italian event, the longest stagerace in the women’s calendar. 27th victory for the Blues in 2021, fourteen by the women’s program

Bouncing back from a 2nd spot at last Tuesday’s first bunch sprint opportunity of the race -she finished behind Wiebes (DSM) in Carugate-, Emma Norsgaard (Movistar Team) gave her squad one of the longest-awaited victories, the first win in the Blues’ four appearances in the Giro d’Italia Donne (UCI ProSeries), with a fantastic sprint on stage six, the longest in this year’s event, over 155km in and around Colico, by the Lago di Como.

The success had a great contribution, just like in previous days with their hard work, by the likes of Leah Thomas, Sara Martín or Aude Biannic, fully involved in keeping the breakaways under control -including a strong duo with Moolman (SDW) and Longo Borghini (TFS)- and later leading the ‘Danish Rocket’ out for the sprint, the Frenchwoman notably active in that duty.

Norsgaard bested Rivera (DSM), Vos (TJV) and Bastianelli (ALE) in a really open sprint, which takes the Movistar Team’s victory account to 27 in 2021, fourteen obtained by a women’s program which never stops brinigng joy to the Blues’ fans wherever they go. The Blut outfit, which continues to aspire for a decent overall result with Katrine Aalerud, should still have a maximum three chances with Norsgaard through Sunday, starting with tomorrow’s lumpy stage seven around Puegnago del Garda (109.6km).

“It’s been an amazing job from the whole team to carry me in good position through those final kilometers. Things couldn’t have gone better today, to be honest. i’m so happy to have been able to crown this after yesterday’s second place, and especially reward my team-mates for everything they’ve for me through to the finish. It’s always said in these situations, but it’s true: this is the result of teamwork. I came close, then I took this win and now the goal has to be to aim for some more. I’m really enjoying this race, I always love doing the Giro, and hopefully with this great group of girls we can continue offering joy to this team.”