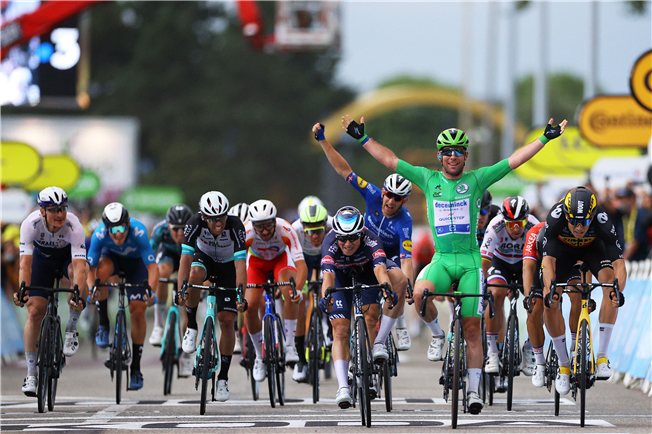 Deceuninck – Quick-Step produced another masterpiece, this time in the form of an out of this world lead-out, powering through in the finale of the nervous stage 10 for Mark Cavendish, who kicked out with 100 meters to go and sailed to his 33rd stage win at the Tour de France.

Tim Declercq and Dries Devenyns were again the ones to lay down the watts early, controlling the escapees and protecting Cavendish on a short unclassified climb with 35 kilometers to go and also later, when the race hit some exposed and potentially dangerous roads. Then, with the business end of the stage approaching fast, the well-drilled Deceuninck – Quick-Step train hit the front of the peloton and steamrolled the opposition.

Julian Alaphilippe, Kasper Asgreen, Davide Ballerini, Mattia Cattaneo and Michael Mørkøv devoted all their energies to keeping the Manx Missile at the front in Valence, delivering a phenomenal lead-out and dropping him off just 100 meters from the line. Another top sprint netted an electrifying victory, as Cavendish howled his way over the line with his arms raised high and a large smile on his face.

“I remember buying cycling magazines when I was younger and you could find there articles on the art of sprinting stuff and how a lead-out works, and this was what we had today. An old school, textbook lead-out, like you read in the magazines. We just got the boys on the front and they pulled as fast as they could so no one could come up and try to come past in the finish. We knew the final kilometers and were confident we had the team for the sprint. I was kept fresh throughout the entire day by the guys, who worked non-stop for me, showed an incredible commitment and made sure I was where I needed to be. All these things make me super proud to be part of this team”, an elated Mark Cavendish said at the press conference.

The 36-year-old, who extended his advantage in the points classification after becoming the oldest rider to win three stages at a single edition of the Tour de France, continued: “I’m so humbled by my teammates’ sublime effort and the lead-out train they provided to me. The winner of Flanders, the World Champion, who has also worn the yellow jersey here, the Omloop Het Nieuwsblad winner and Michael, who’s the World Madison Champion and is going to the Olympic Games to try to win there – they all left everything on the road for me. I just had to finish it off today. I didn’t really do anything, it was the team I have to thank for everything.”