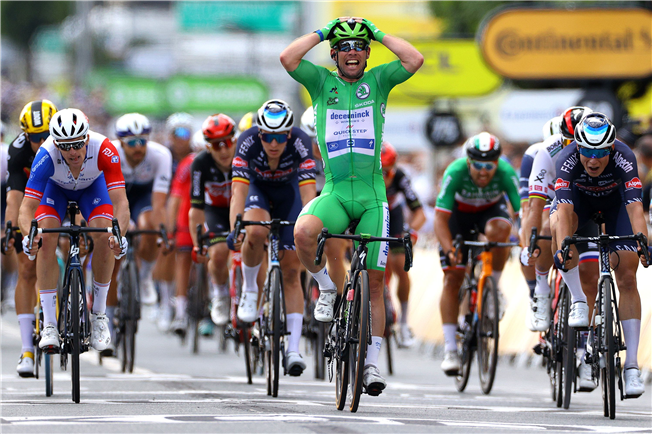 On the day the Tour de France turned 118 years old, Mark Cavendish continued his resurgence and delivered another vintage sprint, capturing his 32nd victory at the race and his third in Châteauroux, the town where he scored his first ever Le Tour win back in 2008.

The Manxman relied again on a fantastic Deceuninck – Quick-Step team who worked ceaselessly on the front from the moment the breakaway was formed and later into the stage benefitted from another masterful lead-out before hitting out with 150 meters to go and bursting clear of the other favourites and stomping his authority just like he did in Fougères, two days ago.

With both hands placed on his head, just like the previous times he won in Châteauroux (2008 and 2011), Cavendish crossed the line a bike-length clear of the riders who completed the podium, celebrating his 50th Grand Tour stage victory – a massive achievement for the 36-year-old, who even at this age continues to show the same unbridled passion, commitment and desire that have fuelled his career ever since turning pro.

“The boys worked hard the entire day and did a phenomenal job, and I can’t be grateful enough to them for how much they buried themselves. The finale was full gas, reminiscent of the one ten years ago, when we went so fast in the last ten kilometers that almost I was at the limit. The wind was coming from the right and I was on the left side, so I waited for a split second longer in the wheels before opening my sprint. To win again at the Tour, where there’s an incredible group of sprinters, is just beautiful and I am super happy”, an over-the-moon Mark said at the press conference.

Cavendish also heaped praise onto his teammates after securing another memorable win, which extended his lead in the green jersey classification: “Tim was again formidable, keeping the stage under control, while Dries, Mattia and Kasper made sure of bringing back the two strong escapees before Julian put in another huge effort in the last couple of kilometers. All I had to do from then on was stay in the wheel of Ballero and Michael, who remained cool as a cucumber, and do my sprint. I can’t tell you how grateful I am to this amazing group of guys. Tim asked me after the stage if I’m in the form of my life, but the truth is that I’m in the team of my life.”