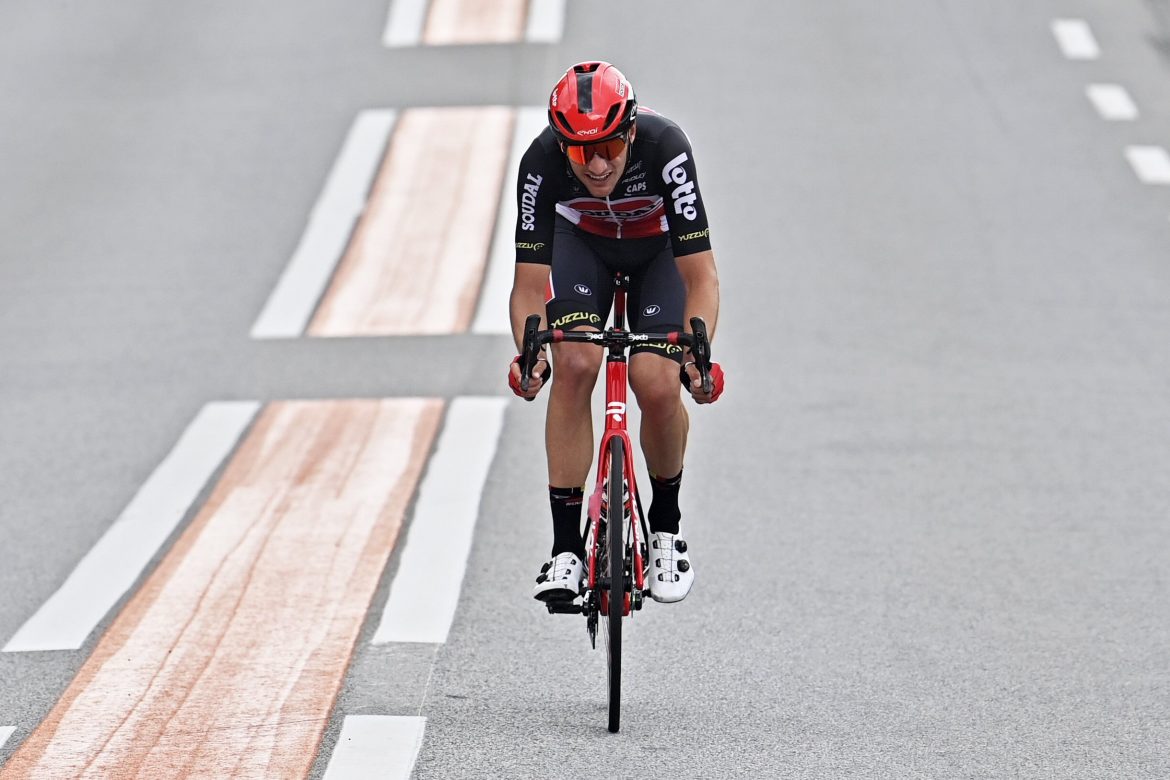 Lotto Soudal rider Brent Van Moer came close to winning stage four of the Tour de France as the 23-year-old Belgian was caught only just before the finish. In a stage destined for the sprinters, Van Moer was the first to attack and formed a breakaway together with Jean-Luc Périchon. At about 15 kilometres from the finish, Van Moer left his breakaway companion behind and powered towards Fougères, where he seemed to be on his way to take a maiden Tour de France stage win. However, the peloton charged towards the finish and caught Van Moer only just over 100 metres from the line. It was the Brit Cavendish who sprinted to the stage win, Bouhanni and Philipsen completed the top three. Brent Van Moer was rewarded with the most combative rider prize.

“After Caleb Ewan was forced to abandon the race, we lost the fastest sprinter in our team. It was rather quiet at the dinner table last night because – with so many sprint opportunities – most of our team was built around Caleb. That is why we had to change tactics and race offensively”, says Brent Van Moer.

And that is what Lotto Soudal did because after ten kilometres of racing, Brent Van Moer was the first to attack as the young Belgian formed the early breakaway together with Frenchman Périchon.

“Despite a small success rate today, I still opted for the breakaway. Of course, I knew it would be a difficult task to stay ahead of the peloton at the Tour, but I kept fighting and gave it my all, which I always do. And such stages with hilly terrain suit me like a glove. I already proved so at the Dauphiné, Tirreno-Adriatico and Ronde van Limburg. In the final 15 kilometres of the stage, my teammates told me through the radio that I could win the stage, which gave me a huge boost. Unfortunately, to get caught at 100 metres from the line is really hard.”

Van Moer says it won’t be his final shot at a stage win this Tour de France.

“To show these kind of things is exactly why the team selected me for the Tour de France. I hope to be at the front again in the next weeks. Although it’s a pity I just missed out on the stage win, I have to put things into perspective. I am only 23 years old and hopefully there are still a lot of opportunities to come”, concludes Brent Van Moer.