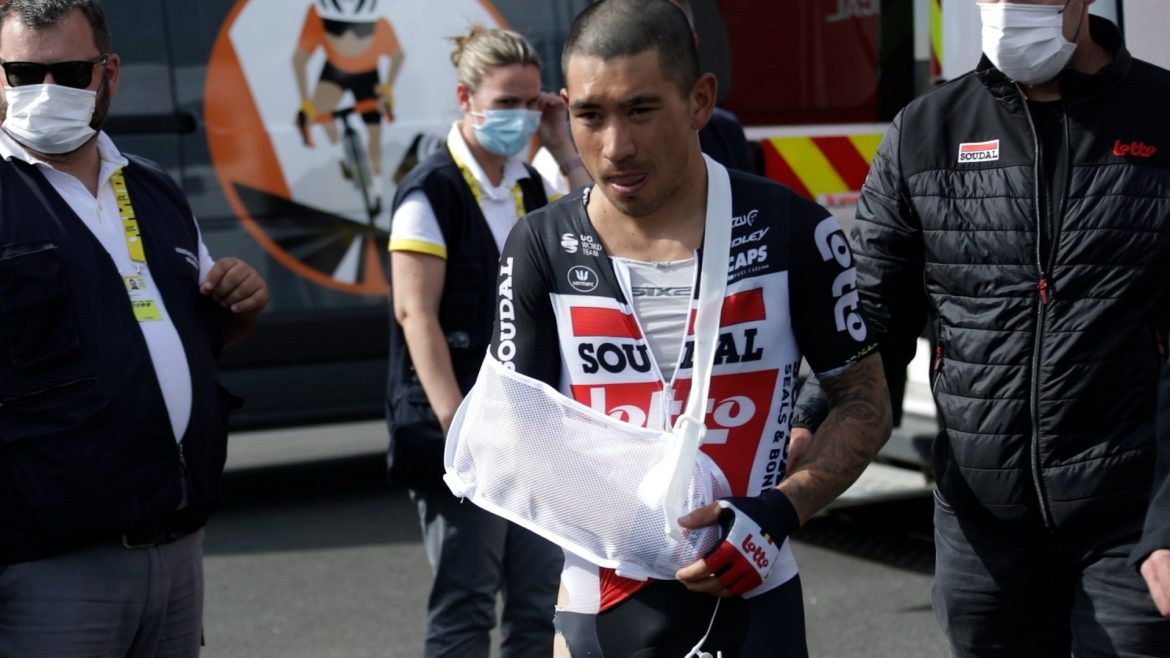 Lotto Soudal’s leader Caleb Ewan will be unable to take the start in stage four of the Tour de France. Following a crash in the final stretch of stage three in Pontivy, X-rays revealed a displaced complex fracture of the right collarbone. On Wednesday, Caleb Ewan will undergo surgery in Monaco.

“I don’t remember too much of the crash as it all happened in an instant”, reacts Caleb Ewan. “I remember that I wanted to start my sprint quite early in the chicane. We began sprinting on the left and when I started my sprint, I saw that the guys on the front were closing to the right so I had to stop my effort and then hope for it to open up again. When all of this happened, I came next to Peter Sagan and we were quite close on the wheel. And when Merlier went against the right, I touched the wheel… Pretty soon, I realized my Tour de France was over. Usually when you crash, you don’t feel too much pain because of the adrenaline rush. But straightaway, I was in a lot of pain and as the medical staff were pressing on my collarbone, I felt it clicking so I immediately knew something wasn’t right.”

Although it’s a major disappointment for Caleb Ewan, the 26-year-old Australian already looks ahead towards the next goals.

“It’s my first time I’ve broken a bone. They told me it is broken in four spots and I need to have surgery to put it back into place. Out of all the bones you can break, I think a collarbone fracture is maybe the easiest to recover from. Unfortunately, this is a part of cycling. I need to let it heal and make plans for the future. There should be plenty of time to let it heal towards La Vuelta, so hopefully this can still be a goal of mine this year.”

With Caleb Ewan, Lotto Soudal loses its leader for the sprint stages.

“Obviously, a lot of the team was built around me so it is really hard to be out of the race so soon. But the guys are all really strong and they can definitely show something the coming weeks”, concludes Caleb Ewan.