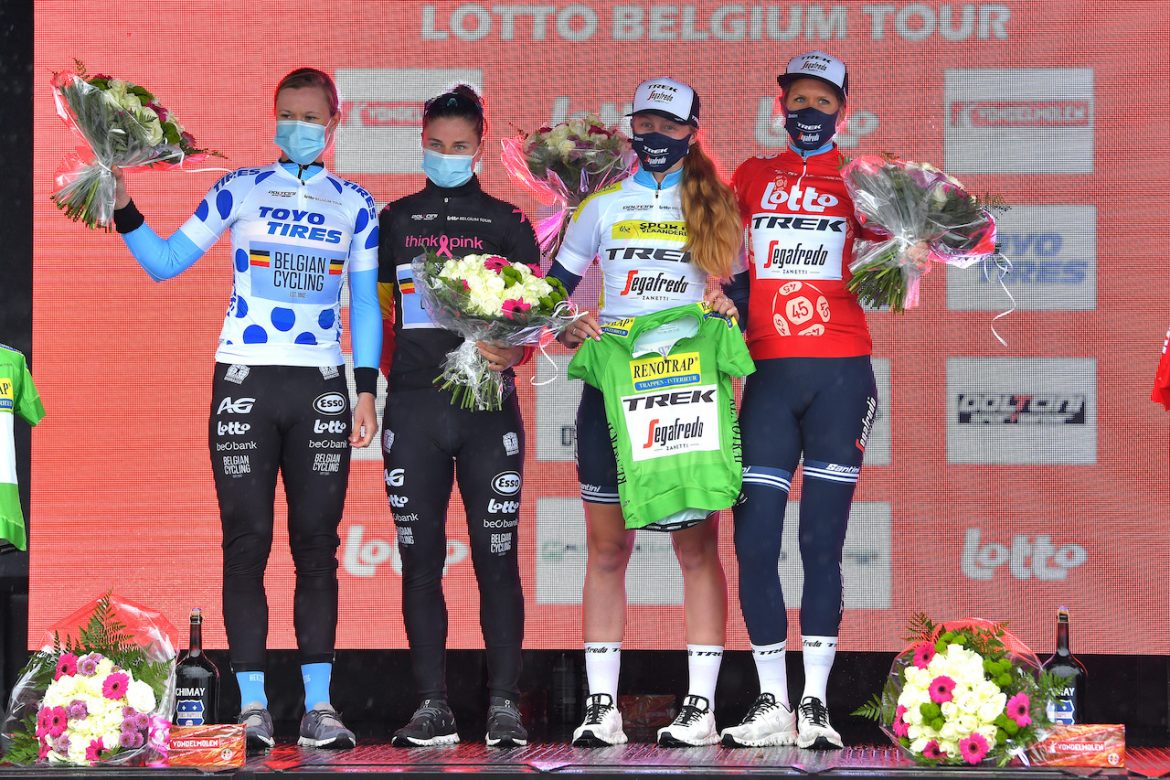 Two cyclists on comeback trails, Ellen van Dijk after dealing with the Covid-19 virus in the spring, and Elynor Bäckstedt, who suffered a broken leg last year, finished one-two in the Stage 1 prologue in the Lotto Belgium Tour.
Van Dijk came into the prologue as a favorite for the win, but the time trial specialist has not been back to her top form since recovering from Covid-19. Today was a step in the right direction for van Dijk.
“I am very happy to win this prologue,” said van Dijk. “It’s nice for my morale after a long period with shit form – I have not had good form for a while, so it’s nice to gain a win here. It was just a nice one – for me and the team!”
It was a typical wet and chilly day in Chimay, but the wet roads were not a factor in a course suited to the time trial specialists.
“It was very wet, but the course was straightforward; there was only one corner where you couldn’t go full,” explained van Dijk. “It was a nice course; I liked it. The first part was uphill, the second downhill. It was a good course for me, and when I started, I wanted to go for a top result. Time trials never feel great; I felt I couldn’t really push enough during the ride. But it was enough in the end, so I am super happy with that.”

Van Dijk stopped the clock in 5 minutes and 33 seconds.  It was a time that easily held up, that is until her teammate, one of the last starters, came flying across the finish and nearly unseated van Dijk.
Van Dijk’s teammate, 19-year-old Bäckstedt, was under everyone’s radar for the 4.4-kilometer race against the clock but changed that with a phenomenal performance, finishing only two seconds slower.
“It’s also great to see Elynor getting second. It was a surprise for herself, and I think for most,” added van Dijk. “We know that she has a lot of talent, and it was really cool to see her so close to [my time].

“Ina (Teutenberg, director) joked with her, ‘You just beat your teammate,’ but she never thought that it was for 2nd overall.  It was really cool to see, and now we are 1-2 in the GC. On to the next days!”
Van Dijk takes the red leader’s jersey into Stage 2 while Bäckstedt holds the young rider and points jersey.