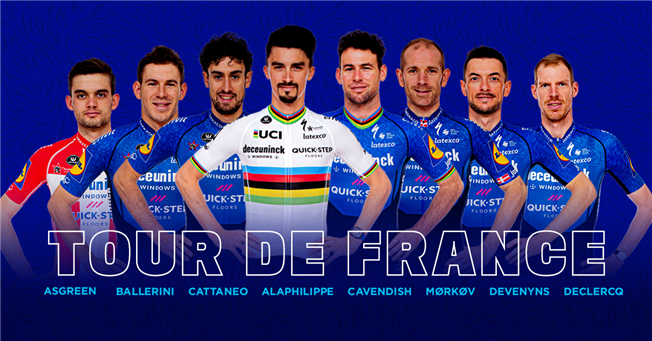 More than 40 stage victories, almost 30 days in the yellow jersey and 8 secondary classification wins – our team has a long and beautiful history with the Tour de France, which we will look to enhance between 26 June and 18 July. The race will start from Bretagne for the fifth time in history – after 1952, 1964, 1974 and 2008 – and will conclude once again in Paris, in between scheduling three summit finishes, 58 kilometers of individual time trial and plenty of stages that will give chances to the sprinters, puncheurs and baroudeurs.

One of the riders who have already left an indelible mark on the Tour de France, Julian Alaphilippe will return to the start hoping to animate again the race and show the same attacking style and panache that have captured the fans’ hearts two years ago, when he led the general classification for an astonishing 14 days. The 29-year-old will have extra motivation, as this time he will race clad in the rainbow jersey he conquered last September in Imola.

The most decorated sprinter in the history of the race, with 30 stage wins and a green jersey to his name, Mark Cavendish will also pin on a number for the Wolfpack, as he makes his first appearance in three years at the Grande Boucle. The Manxman, who so far has enjoyed a solid and impressive season that has seen him rack up five victories, replaces last year’s points classification winner Sam Bennett, who is out of the race due to a right knee injury.

“Needless to say, I’m very disappointed to not be able to defend my green jersey at this year’s Tour de France. I had a very minor incident during training a couple of weeks ago, which effected my knee. While the injury I sustained is very short-term, it impacted my training for the biggest bike race in the world all too much and left me without enough time to be race fit. Le Tour deserves me at my best and it would do my team, and myself, an injustice to race in my current condition. I wish the whole Wolfpack a successful three weeks on the road of France”, explained Sam.

“I am delighted to be going back to the Tour de France with Deceuninck – Quick-Step. Obviously, the circumstances with Sam could be better – he had a special Tour last year and I am sad for him not being able to defend his green jersey. But at the same time, I am excited to be going back to a race that I have such an affinity with and where I have so much history. It is the biggest bike race in the world, and I am going to do all I can to grab this opportunity with both hands”, added Mark Cavendish.

“Our team is a balanced one. Julian came well out of the Tour de Suisse and the opening weekend suits him, so we’ll support him in his quest for a stage victory. Mark returns to the Tour, and it’s great to have someone with his history and experience on the team. He will have a superb lead-out with Ballerini and Mørkøv, and the plan is to take it day by day and see how things go. Kasper will also be one to watch, as there are a couple of stages where he can go in the breakaway, without mentioning the two individual time trials, where he can do something nice. Tim is one of the best helpers in the peloton, while Mattia and Dries will help Julian in the mountains and on the uphill finishes. We are confident and hopeful for a good three weeks”, said Deceuninck – Quick-Step sports director Tom Steels.