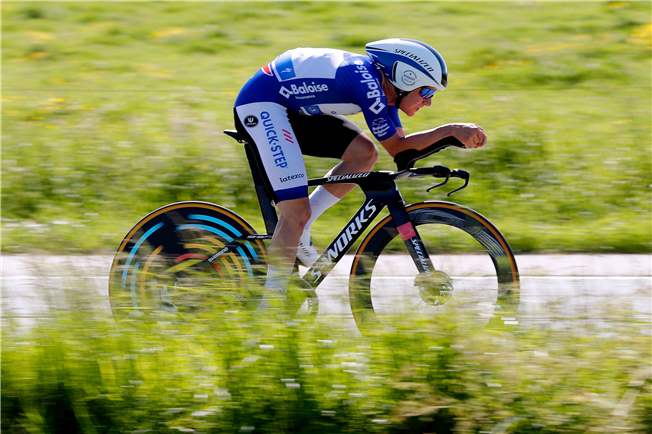 Remco Evenepoel tasted victory for the first time since last August, after producing one of the best time trials of his career on the flat and non-technical 11.2km parcours of the Belgium Tour stage 2. As the last rider to roll down the start ramp in Knokke-Heist, the country’s best-known seaside resort, Evenepoel was immediately in an aero tuck on his Specialized bike and easily found his rhythm, recording the fastest time at the intermediate checkpoint.

Using his power to blast around the course, the 21-year-old bested by two seconds the time of Yves Lampaert – the provisional leader at that moment – and stopped the clock on 12 minutes exactly, after averaging an astonishing 56km/h. The victory, his 15th since turning pro at the beginning of 2019, extended Remco’s lead in the general classification to 45 seconds on the next rider Lampaert, who made a remarkable jump of ten places in the standings after Thursday’s stage.

“I can’t put into words how happy I am! This winning feeling is something that was missing since last year’s Tour de Pologne and I am relieved that I took the stage today. I went through some difficult months with the rehabilitation, so it feels quite nice to win in this discipline that I love so much and contribute to the team’s superb tally. Everyone here supported and believed in me, and for that I am grateful”, Evenepoel said after the finish.

The Belgian, who also leads the points classification after becoming the tenth different Deceuninck – Quick-Step rider to score a victory this year, continued: “It’s my first win of the season and achieving it on home soil makes it even more special. My only regret is that there wasn’t a way to be two riders on the podium, as Yves was very strong and would have deserved the victory as well. The GC picture looks great at the moment for us, but it’s far from being over, so we’ll continue to remain focused until Sunday.”