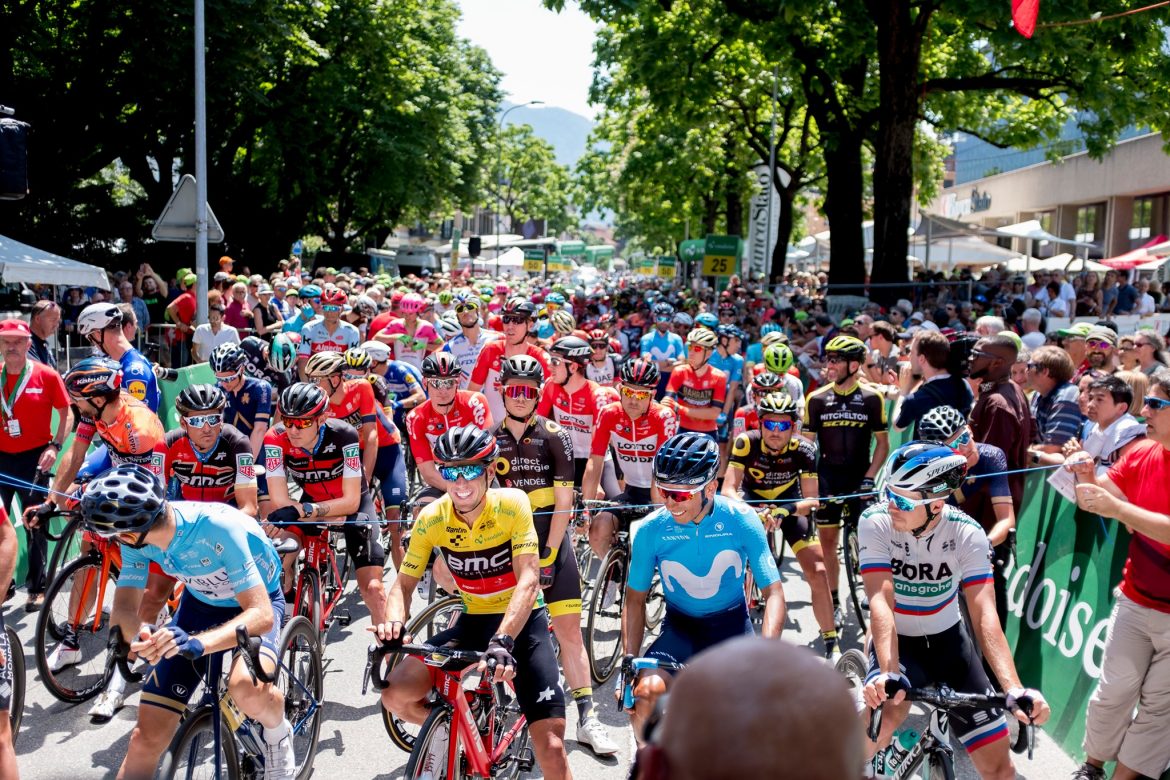 “I finally got a stage win at the Tour de Suisse. And I’m really, really happy with that.”

Not only did Stefan Bissegger win a stage in his home country today — but he was victorious after a dramatic sprint finish. The only thing that could have made this day even more cinematic would be a dose of heavy rain showers pounding on the peloton as they made their way through the Alps. And the Swiss weather delivered.

Yet some rain and slippery roads weren’t going to stop Bissegger from crossing the line first in Gstaad.

“As soon as he could smell the victory, nothing was going to stop him,” said teammate Neilson Powless.

A fast and furious start to the stage saw several of our riders trying to get into the break, including national road race champion Alex Howes and young German rider Jonas Rutsch.

Things started to look promising for Bissegger after he launched an attack with 164 kilometers left to race. Bissegger quickly went on the attack once more and then suddenly found himself in between the break and the peloton.

Once Bissegger reached the break, there were now four race leaders who continued to extend their gap over the peloton. Bissegger may have been the last rider to make it into the break, but once he was there he was leading on the descents and fighting hard to make up for every lost second.

“Rigo and I were sitting very comfortably up the final climb with Stefan up the road. He was able to get into a strong breakaway after fighting and racing really fast and hard,” said Powless.

Then the four riders became three. Benjamin Thomas (Groupama-FDJ) and Joey Rosskopf (Rally Cycling) challenged Bissegger as the three made their way along the Gstaad airfield.

Then came the sprint finish  — and we all know what happened next.

“I am never too confident but we all know Stefan is very fast. He did the sprint perfectly,” said sport director Matti Breschel.

Until now, that is. And this win feels even more special for a few reasons.

“This is a normal road stage as opposed to a time trial, which is more for specialists. Both are really nice, but I’m here in Switzerland and it’s even better,” said Bissegger

Breschel also shares Bissegger’s excitement and knows how special it is for a rider to win in their own country.

“A win is always nice, but Stefan is on home ground,” said Breschel.

The team has a lot more to celebrate besides Stefan’s stage win. “It’s great too because now we’re leading the team classification and I’m still holding onto the best young rider jersey,” said Powless.

The team is gearing up for the mountains ahead. As for now, they’ll celebrate Stefan’s victory.

“I know how much work he put in here. His whole approach to cycling is something I really like and it’s nice to see it pay off,” said Breschel.