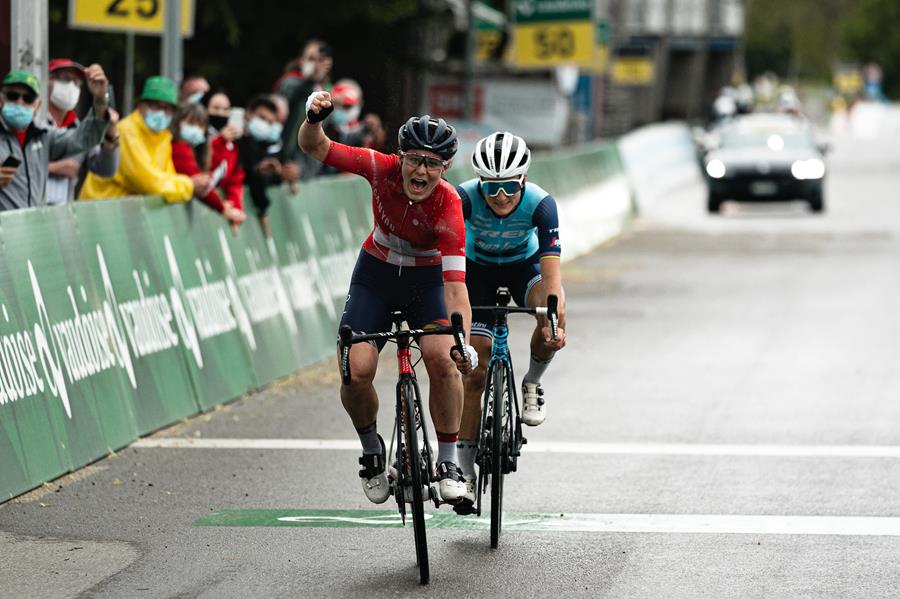 Elise Chabbey from Canyon SRAM Racing won the opening stage of Tour de Suisse Women with an outstanding sprint. The Swiss national champion powered past Lizzie Deignan (Trek Segafredo) in a two-up sprint finish to take the biggest result of her career and move into the tour leader’s jersey.

“It’s crazy! It’s my first victory at an international level and against someone who is a strong sprinter. It shows that you just need to believe in yourself and keep trying,” said an elated Chabbey.

Chabbey and teammate Mikayla Harvey went into a breakaway of six riders at the halfway point on the stage after Deignan attacked on the main climb of the day.

“The break was a great situation for us because it was six good riders and we had two. Everyone was working together well and we quickly understood that our group would go to the end,” explained the CANYON//SRAM Racing rider.

The move reduced to five riders and both Harvey and Chabbey tried their own attacks as the race came to the closing kilometres.

“Mikayla had tried earlier and then I attacked on the last uphill with around 15 kilometres remaining and only Lizzie could follow.”

The duo of Chabbey and Deignan powered away with a final gap of 24 seconds to the third rider and more than four minutes on the peloton. While the favourite coming into a sprint finish was former world champion Deignan, Chabbey proved her own strength to take the stage win.

“I was happy to work with Lizzie because I was thinking two of us sprinting is always going to be a better situation for me than with five riders sprinting against each other. I’ve made some mistakes in sprinting this year because in my career I have hardly been in those situations. You can train to sprint but it’s entirely different when you’re forced to sprint under race pressure. I tried my best and followed the advice of our Sport Director, Lars Teutenberg, in the radio. When I started to come around Lizzie with 50 metres to go I thought ‘I can’t believe I’m going to make it’. I’m so happy. It’s still just crazy that I won!”

“I’m so pleased Mikayla is wearing the youth jersey! Tomorrow is probably going to be a sprint again. because it’s laps and it’s quite a technical course which will make it fast. Of course we’ll try to keep the leader’s jersey but also go for a stage win.”