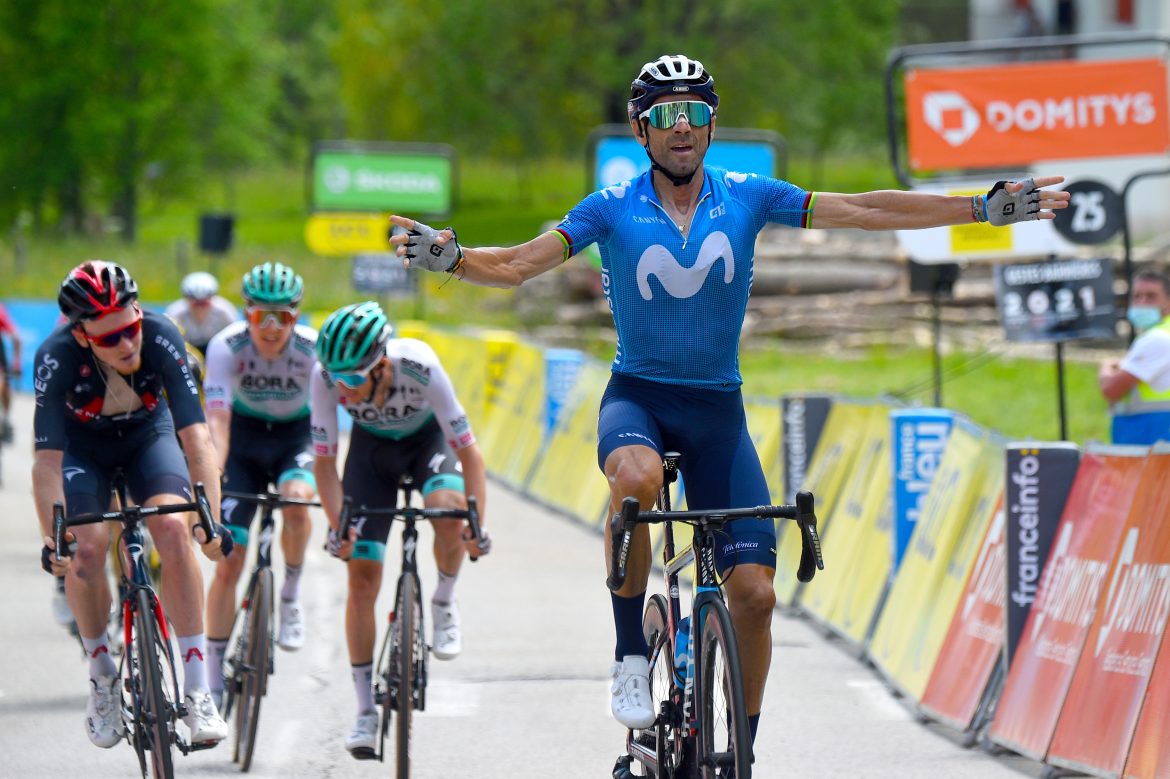 Telefónica-backed squad shines brightly in the Alps, with Carlos Verona and Miguel Ángel López leading ‘Bala’ out into his 129th pro victory, Blues’ 18th in 2021 -eighth for the boys- with his inimitable final sprint

The Movistar Team got back to winning ways, in a big, pre-Tour event like the Critérium du Dauphiné, with the talent of his biggest reference for two decades, Alejandro Valverde, following a great collective exhibition on the final stretch of the 163km stage six, from Loriol-sur-Drôme to the Le Sappey-en-Chartreuse, on the first of three Alpine routes in this year’s French race.

In a day covered at a whopping 43kph average, despite the last four categorized climbs -riders finished more than half an hour ahead of schedule-, the Movistar Team saved all of its power for the decisive ‘cols’ of Porte (Cat-2) and La Frette (Cat-3), where, after nice protective job from Arcas, Rojas and Erviti, Carlos Verona picked up the pace. The Spaniard strung out the field, leaving only the favourites at the front and neutralising the early break -with Lawson Craddock (EFN) as final ‘survivor’-, while at the final ascent to the finish, Miguel Ángel López continued the work to prevent any attacks and lead ‘Bala’ out into the sprint.

Valverde, showing his class and power he’s always displayed over his career, came back to the wheel of Tao Geoghegan Hart (IGD) after his late attack and claimed his 129th victory as a pro, second this year, to increase the Blues’ account to 18 -eighth for the men’s team-… in barely two months, the Abarca Sports organisation having only claimed its first success of the year in March 31st and opening the men’s tally in Navarra – with Alejandro, indeed.

“I’m so, so happy. Before anything, I have to mention, and congratulate and thank my team-mates, for all the work they’ve done for the past few days, ever since the start of the race and even more so today. Close to the Line, López told me on the radio: ‘Should I push, so no one can attack?’ I told him to go ahead – and I have to thank him especially for that, because he was incredible. INEOS put on a big pace before the sprint, but as soon as Geraint Thomas stopped pushing, I knew I couldn’t hesitate: I had to go full-gas to cover that move from Tao. I tried to keep him close, and as soon as I saw the finishing banner, I well on full steam. A special victory? Every single one I get is special, even more so now – being up there with the best, contesting these victory, is even more beautiful after everything I’ve done as a pro. The GC? Well, we’ve got Miguel Ángel and Enric, who have shown to be really strong so far, and there’s two big mountain stages ahead where any of them can aim at the top spots.”