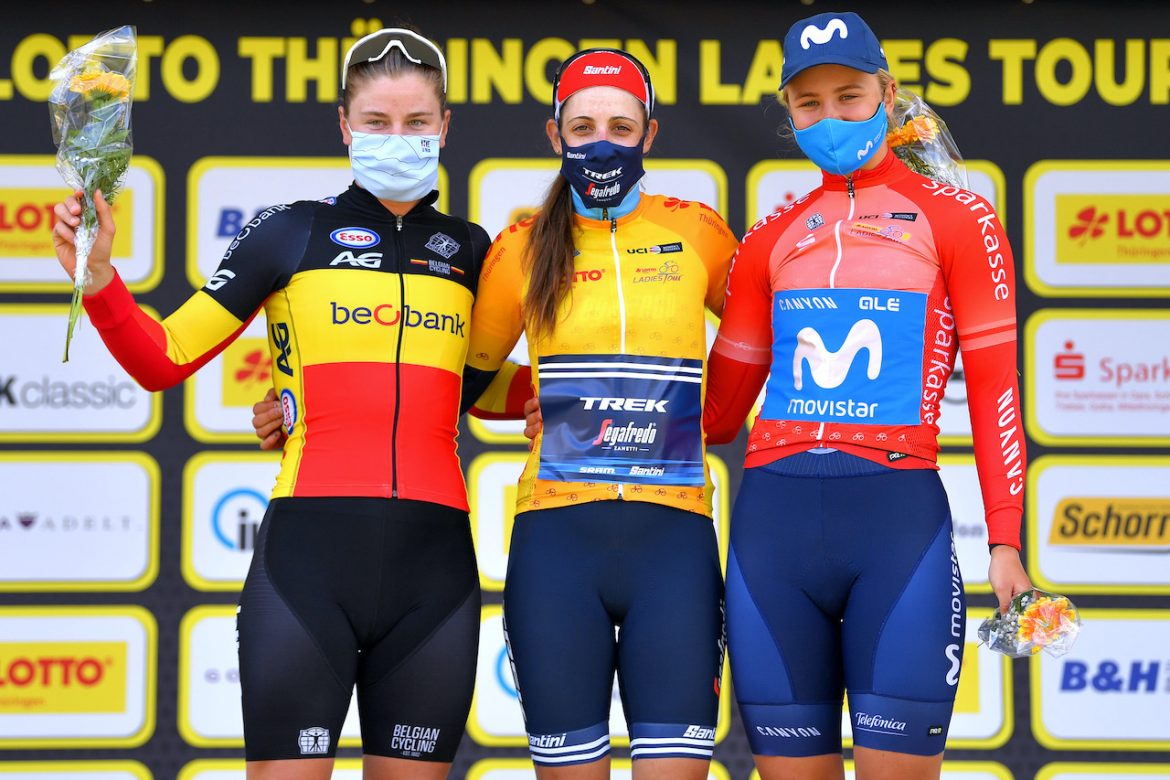 Stage 6 of the Lotto Thüringen Ladies Tour was not a walk in the park for Lucinda Brand and her Trek-Segafredo team. It never is when you are close to winning but know that anything can still happen, and 17 seconds is not a margin of comfort.

But to wrestle the yellow jersey from Brand’s shoulders meant getting past four strong, united Trek-Segafredo teammates first.  And like all week, they rallied around Brand for the final stage. “It has been such a great week. A tough week but really good,” said Brand. “I am really happy with such a strong team around me, especially for a stage race like this where every second counts and you need eyes everywhere. You need to have the trust and stay calm, and it’s very helpful to have a very experienced group around you. They did so much work!  I am super happy about the team and that I could finish it off for them today.”

With bonus seconds on offer out on the road, Trek-Segafredo still needed to be focused for the 98-kilometer Stage 6, and a breakaway had to be the right mix.  With many teams hungry for a stage win, the race started with plenty of attacks, but nothing stuck until after the first categorized climb.

After nearly 40 kilometers had been raced, a group of three riders escaped and finally found freedom ahead of the bunch.

“It was hard to get a breakaway away because everyone wanted to be in it. Finally, there was a break,” said Brand. “Thankfully, no crazy things happened today. It was just about controlling, and we didn’t even have to ride on the front once the break was gone since other teams wanted a sprint, so that was nice.”
The breakaway never gained more than a minute’s lead, and in the last 10 kilometers, the bunch caught the three riders.

The finish was tricky with an uphill sprint, and in one last crucial effort, Trek-Segafredo delivered their leader in good position. Brand finished it off with sixth place and secured the overall win.
“Of course, I felt a bit tired, but I think everyone felt tired today,” admitted Brand. “But the team kept me safe all day, especially in the finale, which was the most important thing,” she added. “We had a really good week here. When a team works for you like this, it’s nice when you can deliver them the final victory.”
Trek-Segafredo won the Teams Classification, a lead they held since Stage 1 and never relinquished over the next five days.