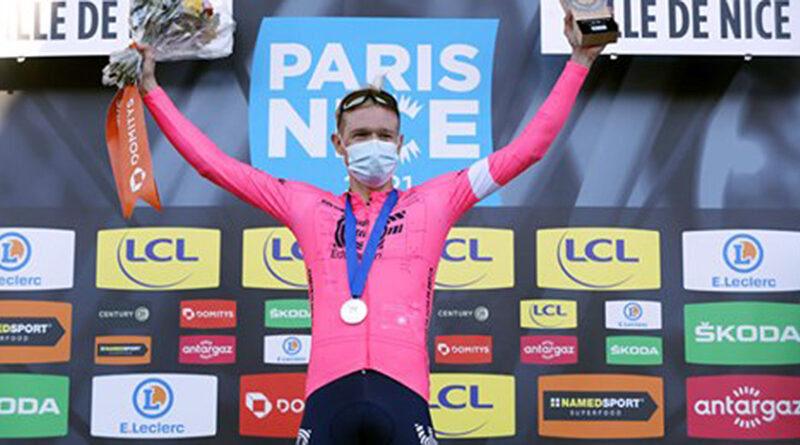 Ask Magnus Cort Nielsen how his time at EF Education-NIPPO has been so far, and his answer is to the point: “Happy!”

We are very happy, too — Magnus will ride with the team for years to come.

Since he joined us in 2020, the 28-year-old Dane has won stages at the Vuelta and Paris-Nice and been a force of nature for his teammates in one-day classics, week-long stage races, and Grand Tours. At the hardest moments of the hardest races, in rain, snow, or blazing sunshine, we can count on him to be there, ready to ride until he can’t turn over the pedals. And when he gets his chance to go for a long break or sprint at the end of an exhausting stage, we know he has the speed, cunning, and determination to win. Off the bike, he brings wit and charm to the group, in addition to his world-class hotel reviews on social media.

Magnus is a true original.

His determination was bred on Bornholm, a rugged Danish island in the Baltic Sea, where he was born and raised. It’s there that he earned his adventurous spirt and no-nonsense attitude. He had to move away when he was 16 to pursue his bike-racing dreams, but still returns whenever he can to visit family and go hiking, or ride bikes with his friends from sunrise to sunset like he did when he was a kid.

At home in Andorra, Magnus fills his days with adventures, too. He is as hard as nails and diligent with his training, but when he isn’t traveling the world from one bike race to the next or doing specific workouts to prepare for big events, he’ll take off on expeditions into the high Pyrenees with his skis or grab his tent for a few days of bike packing. He has a big trip to Mount Kilimanjaro planned for this upcoming off-season. We’re looking forward to his ‘hotel’ reviews from the slopes of Africa’s highest mountain.

And we’re excited to see what he will do in his pink EF Education-NIPPO jersey. Magnus’s powers on the bike are boundless. He has already won stages at the Tour de France and the Vuelta. Could he add one at the Giro and join the elite club of riders who have won a stage in all three grand tours? How about Milano Sanremo? The Italian monument has his name written all over it. Few riders can be faster at the finish of a race of 300 kilometers. One thing is certain; Magnus will make the most of every chance he gets.

“The Tour is obviously coming up not too far from now. I hope for another stage win there,” he says. “I hope to get a few stage wins over the season. And I hope and believe that I also can step it up in one-day races and maybe take a big win in a one-day race. That would be something and something I’m missing in my palmarès.”

Magnus isn’t just concerned with his own results though.

“I can help the team out on almost all terrain. I won’t be the last guy with the GC leader in the big mountains, but I can be there both on flat and hilly roads, and also in team time trials.”