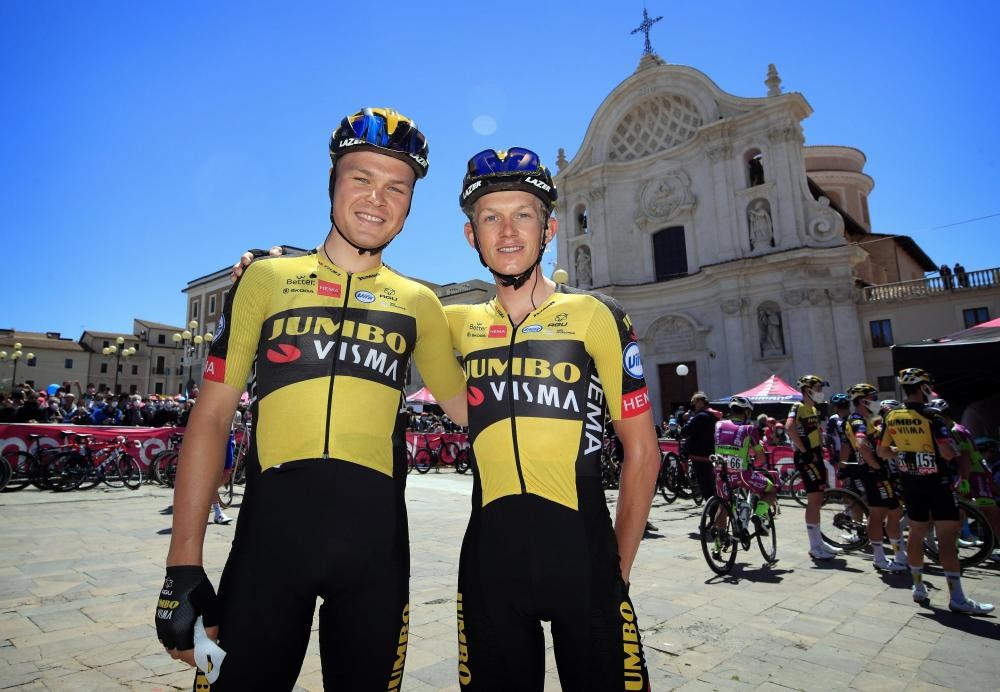 News from the Giro d’Italia: On the first rest day, Team Jumbo-Visma has announced that it has extended the contracts with Tobias Foss and Koen Bouwman by two and three years respectively. “Tobias is a promising rider who is walking the path of gradual progression, and Koen is developing into one of the pillars of our team”, sportive director Merijn Zeeman says about the duo that is currently performing well in Italy.

“I am really happy with my contract extension”, says the nearly 24-year-old Foss. “Since I joined this team, I have had a great time with nice people. I am in the phase of developing myself and that is why Team Jumbo-Visma is the best team for me. It is a privilege to be part of this team and I’m blessed with that. The knowledge within the staff group is very good. With this team I have good odds to achieve my goals. I want to continue that process and it’s an absolute benefit that I can do this within the same team. I’ve been lucky that I started straight in this team. I am very happy here. We have started something beautiful. Now it is time to continue this and get better every day. I focus on that. We will see where it leads. I have big dreams and goals that I would like to achieve. Over time I would like to become one of the new leaders”, the Norwegian concludes.

“We work together to improve step by step”, adds Zeeman. “Tobias is an exponent of our talent development and we are convinced that he will continue to grow during the upcoming years.”

According to Zeeman, Bouwman is also taking steps. “Koen is developing leadership qualities”, says the sportive director of the Dutch team. “He is very valuable for the leaders, but also has the potential to race offensively and to go for a victory. We are very happy that he will stay with us for at least three more years.”

The same counts for the 27-year-old Dutchman. “In recent years I have always reached a very decent level and I have also become better and better. I can be of value in every race and in every composition of the team. I have been giving everything for this team for the last five, six years and I will continue to do that for at least the next three years”, he says. “I joined the team as a quiet, somewhat shy boy. I have grown in that respect. I can now act as a road captain and those are things for which I am grateful to the team. The team has taken incredible steps in recent years. I am proud to have been able to be part of it and that I continue to be part of it. The level of both riders and staff is getting higher and higher and I must and will go along with that development. Hopefully we can achieve higher goals together than we have already achieved so far.”