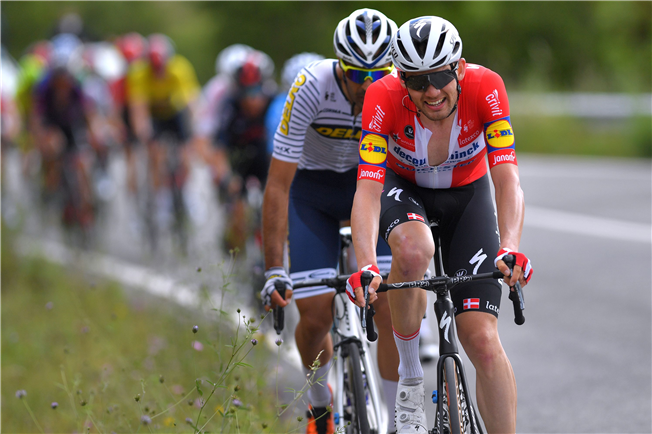 wenty-four hours after storming to victory in the individual time trial, Kasper Asgreen put in another solid ride, on the toughest stage of the race, which concluded atop the mythical Alto do Malhão. The star of this spring’s cobbled classics, Kasper showed his intentions on the penultimate climb, where he ramped up the pace, putting many riders on their limit.

On the descent, Sam Bennett and Michael Mørkøv – who up until that point featured in the day’s large breakaway group – turned themselves inside out for their teammate, keeping the 26-year-old at the front of the depleted bunch and bringing him into an ideal position on the first slopes of the last ascent.

A seated acceleration of Asgreen saw him open a small gap with two kilometers to go, but ultimately the stiff gradients played into the favour of the diminutive climbers, who ended up fighting for victory. Elie Gesbert (Arkea Samsic) took the win ahead of Joao Rodriguez (W52 Porto), who wrapped up the general classification, where Kasper finished in third place, a remarkable result given the nature of the course.

“I punched a bit above my weight on those climbs, but I felt I could do something. A massive shout out to the team, they rode amazingly today and did an incredible job for me. Overall, it’s been a nice return to racing for me. On one hand, I’m a bit disappointed, because I lost precious time on the first stage, when I got caught up behind that crash, but on the other, coming into the race I didn’t know what my condition would be and what I would be able to do. That’s why I’m quite satisfied with the week I had”, said the third Dane in history to conclude on the Volta ao Algarve podium.