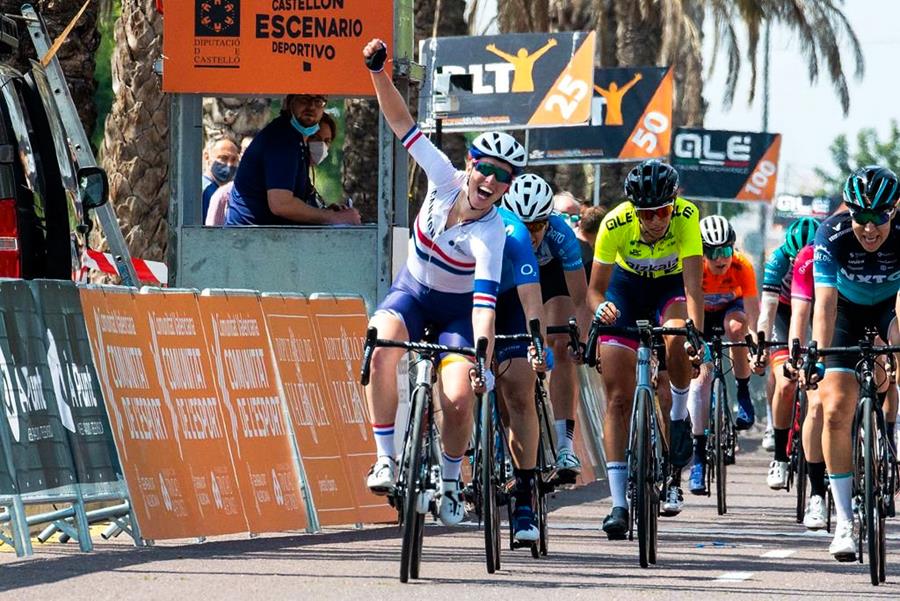 Alice Barnes sprinted to victory on the third stage of Setmana Ciclista Valenciana today in Valencia, Spain. The CANYON//SRAM Racing rider had full support from her teammates who were instrumental in chasing the final breakaway over the last 25 kilometres and providing what Barnes described as a perfect lead out.

“I feel relief. It’s my first win since 2019 at road nationals, and my first win internationally since 2018,” said the British national champion.

“I feel like I was expected to win today from within the team but also from the other riders in the peloton. I’m one of only a few sprinters here so it was time to show it, and also after the amazing work the team did in the final 25km, there was no other option but to win today,” said Barnes.

Barnes said the team had to take responsibility to do the chasing in the final kilometres of the race.

“We knew that no one else would help the chase with me there as a sprinter. All of the team did well to help control and then reduce the gap to the three riders. In the final ten kilometres basically Tiffany (Cromwell) and Lisa (Klein) were swapping turns and then they did the lead out and no one could come around us. I had to deliver after that. It’s nice to get the win for the team too after being so close several times during the spring.”

Barnes continued, “Tomorrow is the queen stage so we expect it to be hard. All of us are climbing well though, and with Omer (Shapira) in the jersey and two of us in the top ten on GC, I’m sure it will be a busy day.”