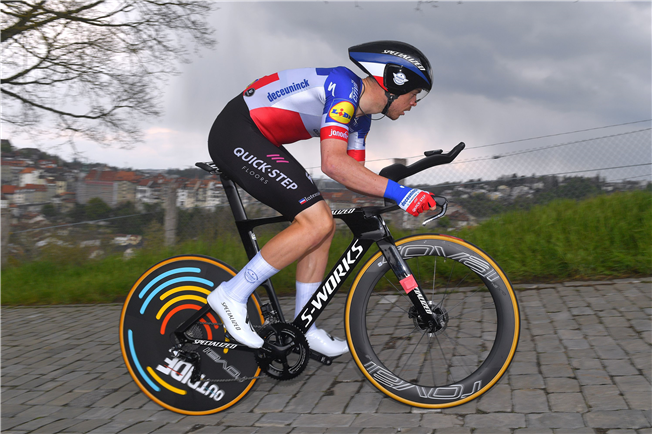 Rémi Cavagna finally got his first victory of the season, after coming agonizingly close twice in the last couple of weeks at both Paris-Nice and Volta a Catalunya. The French Champion was one of the favourites before the start of the 16.2km individual time trial that brought down the curtain over the Tour de Romandie, and didn’t disappoint on the hilly course around Fribourg, which he tackled on his Specialized Shiv.

Cavagna set the fastest time at the intermediate checkpoint (13:47) courtesy of a flying ride, and despite losing some of the momentum on the difficult second part, which included some stinging ramps, he still had enough left to go into the hot seat with a time of 21:57 after averaging 44.35km/h. It was a long wait for the French ITT Champion there, as more than 50 riders were still left at the start, but none could get close to him, and the 25-year-old from Clermont-Ferrand nabbed his much-wanted win.

“The parcours didn’t really suit me, as it had some technical parts and steep sections, but I was very motivated to do well and conclude the week on a high note. I am very happy because Romandie is a beautiful race and to get my first victory of the season here feels great. Today I gave 200% and I got a result that gives me a huge boost of confidence ahead of the Giro d’Italia, where I have some personal goals, but I also want to help the team”, a delighted Rémi said.