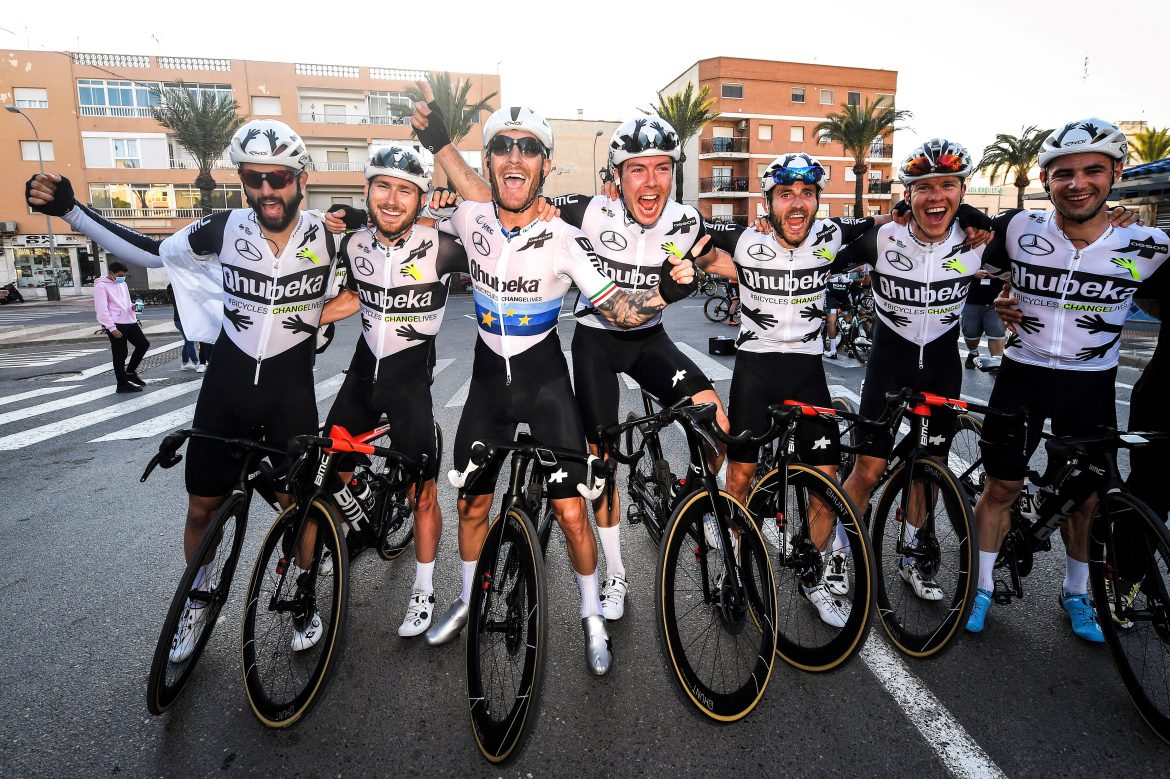 The 104th edition of the iconic event (8-30 May) will see the Italian duo of Giacomo Nizzolo and Domenico Pozzovivo spearhead our efforts in our 6th appearance at the race.

Nizzolo, the current European and Italian champion, returns to his home race having last ridden in 2019, and will be looking to add another chapter to his own history with the event.

Twice the winner of the points jersey – in 2015 and 2016 – the 31-year-old will be aiming for a first-ever stage victory in his ninth appearance.

2021 has seen the man from Milan in strong, fighting form with ten top-10 finishes, punctuated by victory at Clasica de Almeria along with a strong Classics campaign. The highlight of that being placed second at Gent-Wevelgem in Flanders Fields.

Pozzovivo takes to the start line of the Giro for the 15th time, his 21st Grand Tour, and will be looking to build on the incredibly strong performance he displayed in 2020. After initially fighting it out in the opening two weeks of the race inside the top-10, he faltered slightly in the final week finishing 11th overall on the general classification.

A former stage-winner here nearly 10 years ago, and having finished five times inside the top-10 overall, the 38-year-old will be looking to proudly fly the Qhubeka colours in his favourite race.

By contrast, there will be two Giro d’Italia debutants in our selection in Germany’s Max Walscheid and exciting young Swiss rider Mauro Schmid. The German makes his bow following on from his first start of the Tour de France in 2020, and will be a crucial support to Nizzolo in the sprint opportunities on offer.

Schmid, who has impressed during the course of 2021, will be tasked with using his rapidly improving racing nous in delivering on team’s daily objectives, a role he will be relishing.

Schmid’s joined by compatriot Kilian Frankiny who rode his first Giro d’Italia in 2018 and then followed that up with an excellent ride in 2020. His top result last year was finishing 4th on stage nine, and then placing 5th on stage 17, the day in which former rider Ben O’Connor was victorious.

In the support of Nizzolo and Walscheid, in particular, there will be crucial roles played by the experienced duo of Bert-Jan Lindeman, who has twice previously ridden the race, as well as Poland’s Lukasz Wisniowski who lines up for the second time.

Our selection is completed by Belgium’s Victor Campenaerts. The time trial specialist will be focused on the opening stage 8.6km route in Torino as well as the traditional closing stage in Milan. In 2020, he was second on the final day, as well as placing second on stage 19.

2020 has seen Campenaerts show his versatility following a strong performance during a debut Classics campaign, and he’ll be a man to pay close attention to over the course of the race.

Throughout 2021 Team Qhubeka ASSOS has had fans announcing our team line-ups via a video submission in whatever way they chose fit. This has been hugely well received and the unique nature of this engagement has brought them, both old and new, right into the heart of our team.

For the 104th Giro d’Italia we called upon an extra special set of supporters to make the announcement: step forward Team Qhubeka ASSOS staff members!

These are some of the most important members of our organisation, the people working behind the scenes to enable our team to compete on the world’s biggest stage; who embody the purpose of our team in changing lives through bicycles, in the true spirit of Ubuntu – I am because we are.

I can’t wait for our team to tackle the 104th Giro d’Italia. Going through our final preparations sees me really motivated and we will have some exciting plans in the works for the race.

We’ve selected a very interesting team, and quite rightly there will be focus and attention on the selection of the European and Italian champion. Speaking with Giacomo, I know he is very motivated and can’t wait to get racing.

The racing experience we have through the likes of Lukasz and Bert-Jan will be invaluable, while Kilian showed himself really well last year and this year he will ride in support of Domenico Pozzovivo.

For Pozzo, well he’s certainly not getting any younger but we know that he is an incredible fighter, and will show himself and the team to the best of his ability. While in Max and Victor we have guys who not only time trial well but also can play multiple roles across the stages, so I’m excited and optimistic as to what they will offer us.

One thing is for certain, our team will be ready to fight. We know the incredible role we play in changing lives and will proudly live up to that in this fantastic event.

Despite the challenges that the world continues to face I know that we’ve prepared well for the Giro and that we’ll travel with hopes and dreams looking towards stage wins and a fairly high placing on the general classification.

This is an incredibly special event, one that has deep meaning to our team. I was exceptionally proud of our performance here last year in which we won a stage and had Domenico showing true grit in fighting the way he did all the way to Milan.

The Giro is one of the most important races of the year for me and especially this year because of the jerseys that I wear; racing on the Italian roads is really special. I’ve been watching this race since I was a kid so it’s always a privilege to be a part of the show.

Twice winning the points jersey has been very special and on reflection makes me really happy and proud. This year the goal is to win a stage and then see how I feel over the course of the race.

I feel good ahead of the race, ready, and I’ve been training well. I had a good first part of the season where I’ve felt good and had some solid performances so I’m confident that I can perform well. First of all I want to fight and do my best and then we will see what the road will bring.

We race for Qhubeka – every single day – and even when not racing this is top of mind. We know how important this is for people that we continue to live the message that bicycles change lives. I’m super proud to wear the European jersey and being the Italian champion with this message on my shoulders.

I really hope that the Italian people will appreciate our efforts on the road, these are hugely important reasons for us to be proud ahead of the start of the Giro.

Starting a Giro for the 15th time is something I never imagined I could achieve when I started racing. My goal for the race remains a place in the top 10 of the general classification, even if after my most recent surgery I’m still looking to find my best shape. That said, I’ve seen some encouraging good signs from my last races.

The Giro is the race I dreamed to race when I was child, and the race where I have achieved my best performances. It’s always a race that gives me incredible motivation.

Racing at home for a team with a special purpose means to convey a very important message to people that know and appreciate you, and therefore are very receptive to it.

I am very happy to complete my selection of Grand Tours after doing the Vuelta and the Tour.

I’ll be a key part in the lead-out for Giacomo and am very motivated to also take results myself if the opportunity pops up, starting with the time trial on the first day but also during the following weeks of racing, when possible.

I’m really looking forward to the Giro d’Italia this year in what will be my third appearance and I have very good memories of the race. I really love it because in Italy cycling is not just a sport, it’s so much more and the Italians just love it.

The fans really come to the roads to cheer, and love it. It’s just a beautiful country with amazing food, stunning scenery, with the ocean and mountains. I really love it. Last year I had two top-five finishes in Roccaraso and then on the Madonna di Campiglio, so I’m really excited to race there again.

In Giacomo in the sprints and with Pozzo we have a guy who can feature strongly in the GC ,so I’m looking forward to support them when they need me and I hope that I can fulfill this job.

Of course I also hope that perhaps one day I can go in a breakaway (why not?) getting to the finish and hope to be on the top step, not just outside of a podium place. That would really be a dream come true, to win a nice mountain stage at the Giro d’Italia.

It’s very special to have the chance to ride this Giro in a purpose-driven, high-performance team. I think it’s really nice that we have in Qhubeka a purpose behind the team, to assist people to develop, and gives us added motivation enabling us to achieve great things together.

I am incredibly excited as the Giro is one of the races I watched along the side of the road when I was a kid, and now I will actually be racing in it.

This was always a dream of mine and now it is coming true and so I look forward to my first grand tour.

The Giro is coming soon after the Classics which is great. With Pozzo in the GC and Giacomo for the sprints we have great objectives within the team!

I had two podium finishes last year and will have an important job for the team this year but perhaps I will have the opportunity to show a bit of myself too depending on how the race goes – who knows!

I’m incredibly happy to be back at the Giro, this was the first Grand Tour of my career so I’m excited and cannot wait to race on Italian roads.

Unfortunately it will be without fans along the roads but we know how important it is to respect the current situation the world finds itself in and we know that the fans are supporting not only ourselves but all of the teams, and we can’t wait to see them all again in the future.

I’m heading to the Giro after a small camp in Tenerife and looking forward to help Giacomo and Domenico achieved good results.