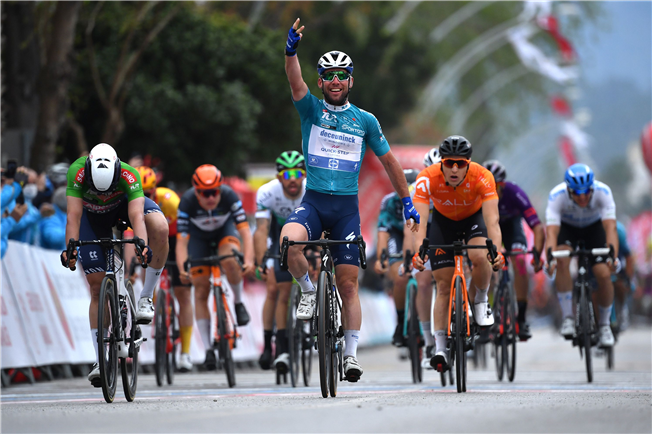 The seaside resort of Kemer, lying on the beautiful Mediterranean coast of Turkey, witnessed a memorable milestone of Deceuninck – Quick-Step, another one in a long series of notable achievements recorded by the Wolfpack since 2003, the year that the team was created: our squad’s 800th win in a UCI race, brought by none other than Mark Cavendish.

Our guys controlled again the stage, Iljo Keisse putting in a superb effort behind the break which he made sure of overhauling with more than 20 kilometers to go. Things remained calm until inside ten kilometers remaining, when Deceuninck – Quick-Step made its way to the front, Fabio Jakobsen slotting the lead-out train into position before Stijn Steels stretched out the peloton with an enormous pull.

Shane Archbold and Alvaro Hodeg did a spectacular job ahead of the final kilometers, bringing the Manxman to the head of the bunch just as things were heating up, and Mark Cavendish delivered another huge sprint in a hectic finale marred by a crash, bursting clear from the pack with 150 meters to go and sweeping past Jasper Philipsen (Alpecin-Fenix) on the way to his tenth victory at the race.

“It’s nice, and to be sincere, it’s irrelevant how many wins are in a row, it’s just nice to win again. It’s great that the team believes in me and I’m grateful to them for that. At the beginning of the year all I wanted to do is win a race, and now I have done it three times. I’m proud to have racked up Deceuninck – Quick-Step’s 800th victory, but to me the most important thing is that I’m part of this family, which is an honour.”

“The most special thing about today wasn’t my win, but seeing how far into the stage Fabio got. It was beautiful to see him there, doing a phenomenal job for the squad and enjoying racing. Having him up there motivated me to finish it off. I’m proud to have such amazing teammates, and at the end of the day, that is what really makes everything special”, added Tour of Turkey overall leader Mark Cavendish.