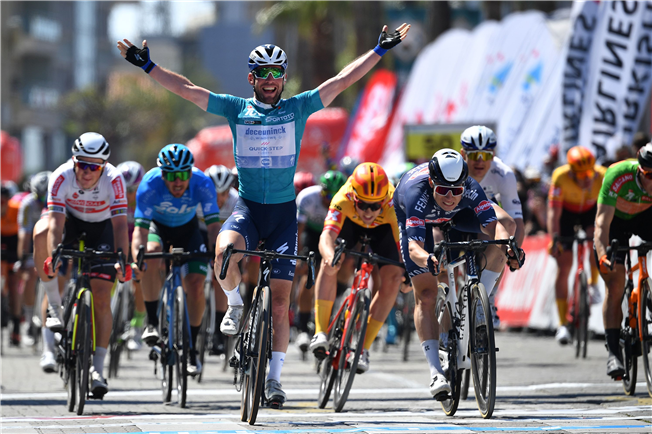 Mark Cavendish kept the wins flowing, roaring over the line with his arms held high for the second consecutive day at the Tour of Turkey, after outpowering his opponents in the closing meters of the race’s longest stage, which travelled from Beysehir to Alanya, over 212.6 kilometers.

A four-man group animated the day after the first hour of racing, but Iljo Keisse once again kept their gap in check, working at the front for over 150 kilometers, before Fabio Jakobsen and Stijn Steels took over in the closing part of the stage, just as the peloton was entering the wide roads embracing the sunny coast. With the breakaway overhauled at 15 kilometers to go, they pushed a big tempo in the wind, keeping the Deceuninck – Quick-Step well positioned in the front at all times.

Going under the flamme rouge, Mark got himself into a perfect slot after another strong work of Shane Archbold and Alvaro Hodeg and waited for the right moment to pounce. This happened with 150 meters to go, when the Manx Missile came around all the other sprinters and delivered a massive acceleration that saw him hit the front and hold off Jasper Philipsen (Alpecin-Fenix) and Stanislaw Aniolkowski (Bingoal Pauwels) for his ninth victory at the race.

“My confidence is still coming back and today I had more than yesterday and knew I could fight again for the victory. It was a difficult finish over the urban cobbles and with that treacherous wind, but we wanted to control the sprint ourselves. Iljo was again incredible and what he did motivated us for the finale, where we were all together. Fabio also worked hard and it was nice to see him at the sharp end of a bike race, Shane and Stijn rode a lot in the wind, while Alvaro was there for me under the flamme rouge.”

“The fact that I won again gives me a lot of confidence, especially as it’s for the first time in five years or so that I’ve claimed back-to-back stages in a race. Doing it in the leader’s jersey makes it even more special. We’re happy and we’ll continue to enjoy ourselves here”, a delighted Mark Cavendish said after the victory that extended his lead in the Tour of Turkey general classification.