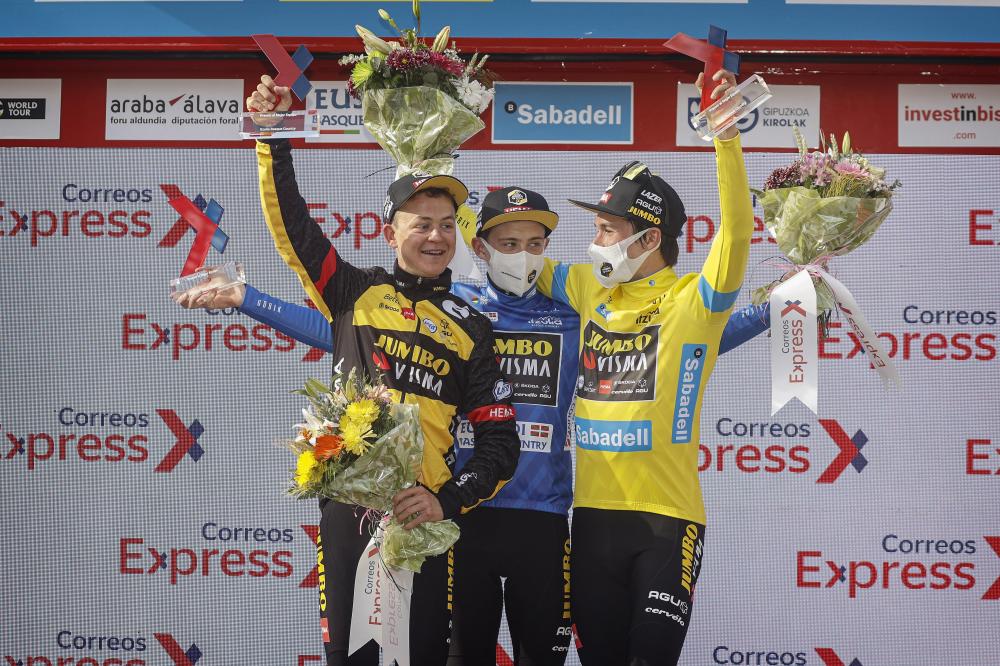 Primoz Roglic has won the Tour of the Basque Country for the second time. In the final stage with seven climbs the leader of Team Jumbo-Visma finished second. Teammate Jonas Vingegaard finished behind Roglic in second place in the final classification.

The Dutch team also took all jerseys and the team classification. For Roglic it meant his fifth victory of the season and the thirteenth for Team Jumbo-Visma.

The short queen stage was spectacular from the beginning. Antwan Tolhoek and Sam Oomen were part of the leading group. In the descent of the fourth climb the peloton broke into pieces. Roglic created a gap with his direct competitors Brandon McNulty and Tadej Pogacar. The Slovenian joined the group with Tolhoek and Oomen a little later. The advantage of the group quickly increased and fluctuated in the remainder of the stage around 40 seconds. On the finish Roglic left the day’s victory to his only remaining co-escapee David Gaudu.

Roglic looked back on his final victory with a good feeling. “I am very honoured to have won the overall classification. Luckily we were spared bad luck this time. This stage was short, but powerful. It was a tough day, but the end result was worth it. I am very proud that we have done the maximum here with a young team. I knew the course. There was nothing left to do but ride hard today. I enjoyed riding in the Basque Country last week. The result only makes it better. I am proud of the talented team we have raced with this week. Jonas’ second place in the general classification is a nice reward for his strong performance.”

Vingegaard himself was very pleased with his performance. “I have made a very big step this season. I am very happy to have finished second in the overall classification. I was disappointed not to win Thursday’s stage, but this performance makes up for everything. I would have signed for second place and the win in the youth classification in advance.”

Sports director Grischa Niermann saw the tactic that had been outlined turn into a success. “A great day for us as a team. It turned out exactly as we had planned. We wanted to race from the start and put the competition under pressure. Today we did a great job as a team. We take all the jerseys home in one of the toughest races of the year. The compliments not only go to Primoz and Jonas, but to the entire team. Not everyone understood our tactic in the past week, but in hindsight it appears that it was the right one. Today we have proven once again that we have more to offer than just controlling the race. We end this week with an excellent feeling.”