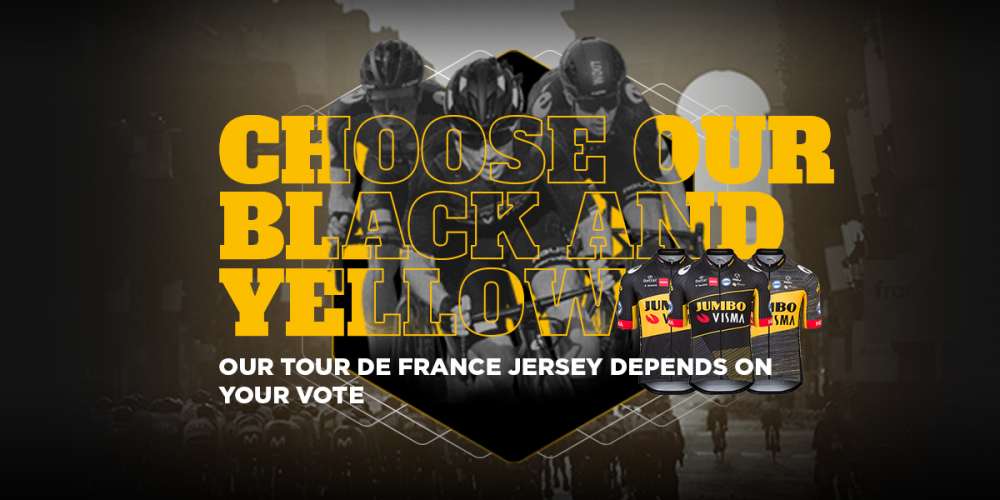 Brest, 26 June: the moment when Team Jumbo-Visma will start in ‘La Grande Boucle’ with new hope and ambition. This year they won’t be wearing the familiar jersey, but a specially designed one, chosen by the fans for the 2021 Tour de France. Team Jumbo-Visma even goes a step further. This summer the cycling fans will literally ride along with the team.

Because of the similarity between Team Jumbo-Visma’s regular jersey and the Tour de France’s yellow leader’s jersey, the organisation of the Tour and the UCI have asked the team to come to the start with an adapted jersey. The team uses this as an opportunity to do something special. For the first time in history the choice of the jersey is in the hands of the fans.

Together with partner AGU, three special designs were created, each with their own story. Fans and cycling enthusiasts can vote for their favourite shirt from 7 April to 15 April via ourjersey.teamjumbovisma.com.

But Team Jumbo-Visma goes one step further. Besides their own character, the three jerseys have one thing in common: fans are central in the design. On all three shirts space is reserved for the names of the fans. This summer fans will ride with the team. Literally!

Fans can get their place on the jersey by purchasing their preferred jersey between 19 and 28 April. From that moment on, the fan actually becomes part of the Tour de France team and a unique experience follows, bringing the cycling fan closer to the Tour than ever before. More about that later.

Richard Plugge, general manager of Team Jumbo-Visma: “Since the last edition of the Tour de France we have been in talks with the organisation ASO. Out of respect for the yellow jersey we and our main sponsors Jumbo and Visma wanted to think along to adapt our shirt. This presented us with quite a challenge. We have taken this as an opportunity to involve cycling fans in our team as never before. So the ‘ninth’ man will be at the start in Brest with our team of eight.”