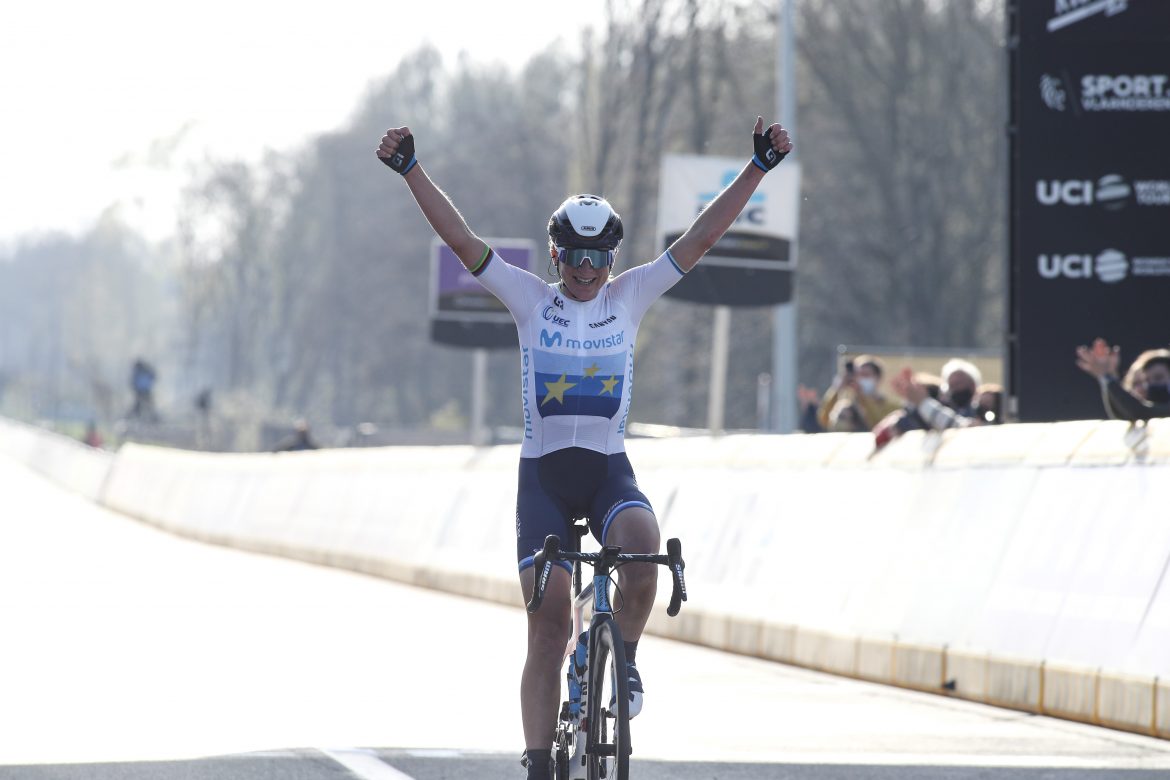 42 years after the start of their professional trajectory, in their fourth season in the UCI Women’s peloton, the Movistar Team has experienced a truly special moment on Sunday: winning the Tour of Flanders, one of the most prestigious one-day races in the world, never conquered by a Spanish team. Annemiek van Vleuten raised her arms victorious in Oudenaarde, her second success in ‘De Ronde’, to crown a big gamble from the Telefónica-backed squad and offer them a first success – and an incredible one- in the UCI Women’s WorldTour.

Protected by Guarischi, Biannic, Erić -part of the initial moves- and Norsgaard from the start of the 154km ‘Vlaanderens Mooiste’, and perfectly supported by Leah Thomas, who remained active even at the most difficult parts of the race, Van Vleuten quickly put her cards on the table and split the group with two strong attacks with 45km from the finish, at the Kanarieberg. Once the first selection was made, Annemiek remained calm and waited for the final series of climbs to hit back.

Jumping across to Grace Brown’s (BEX) wheel after Oude Kwaremont, Van Vleuten made a big effort to enter first through the foot of the last climb, the Paterberg, which she crested with a dozen seconds’ advantage, enough, despite a hard final pursuit, to take a resounding victory. A third win for the Movistar Team, after the European champ’s Waregem success and Valverde’s GP Miguel Indurain triumph, at an Easter week / ‘Semana Santa’ which will long remain unforgettable for the Blues.

“I still can’t believe it. It’s been so many years seeking for another victory here, and today it finally happened. I was always super prepared heading into this race, but I always came on the verge of success. Our strategy for today was never letting other teams use their strength in numbers against us. That’s why we started working early and that’s why I tried from so far away from the finish. I wanted to just go on the Kanarieberg, but there was a headwind and that made difficult to open any gaps. However, I feel like that attack took its toll on the group and made things more difficult for everybody, which suited me well.

“After that move, I had to seek for another appropriate moment to try it. At the Paterberg, I knew there were no second chances left, and I had to enter first, exit first. After that attack, it was just doing my maximum and counting the kilometers down. I was so tired, but I could just go ‘full gas’ until the finish. It wasn’t easy at all, but we finally got it again.

“It’s a really special day for the Movistar Team, which had never won a classic like that, and it’s really beautiful to live these moments with them. Thanks to the whole team, for their fantastic job once again; they all played a part in this success. Also to Telefónica and our sponsors, and everybody who loves and supports us.”