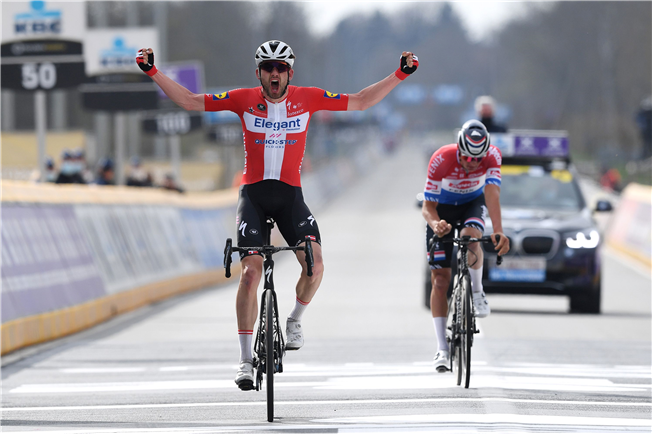 The Danish Champion signs off the first ever Monument victory on clinchers at the end of an incredible race.

Kasper Asgreen rode straight into the history books on Easter Sunday, powering to an incredible victory at Ronde van Vlaanderen, which he won after being part of all the major moves during the race. The first Dane in 24 years to triumph in Flanders, Kasper completed a prestigious E3 Harelbeke – De Ronde double and confirmed his status as one of the peloton’s finest Classics riders.

“I can’t believe it! Ronde van Vlaanderen is the most beautiful race in the world for me, the cobbles and steep hills make it awesome, and to win it two years after I podiumed at my debut here feels incredible! It’s three years to the day I raced for the first time with this team and to be on the top spot at Flanders makes it even more special. It was a hard day, but I felt good and I couldn’t be happier with this win that capped off a stellar job of my Elegant – Quick-Step teammates”, an elated Kasper said after the biggest victory of his career.

Comprising 19 hills and seven cobblestone stretches, this year’s 254.3km Ronde van Vlaanderen witnessed another masterclass of Elegant – Quick-Step, who came into the race with several cards to play and once again controlled things with the likes of Davide Ballerini, Tim Declercq and Bert Van Lerberghe, who did a superb job in chasing down the breakaway and putting pressure on the peloton in the last 100 kilometers.

Racing the Ronde van Vlaanderen for the second consecutive year in the rainbow jersey, Julian Alaphilippe was another rider who played a big role in the team’s success, going clear on the gruesome ramps of the Koppenberg and forcing the other favourites to show themselves earlier than expected. A regrouping took place on the descent, Kasper Asgreen being among those to join the World Champion, who continued to be the driving force of that leading group.

Another dig of Alaphilippe on the Taaienberg distanced some of the riders, paving the way for an attack of his Danish teammate with 27 kilometers to go. Only Wout Van Aert (Jumbo-Visma) and Mathieu van der Poel (Alpecin-Fenix) could follow, and the three worked well together, quickly opening a comfortable gap over the chasers. On the Oude Kwaremont, the Dutchman went full gas and put some distance between him and his companions, but Asgreen gritted his teeth and joined him on the descent.

Not even the Paterberg – where our rider led the way – could change the status quo, and the duo continued to soldier on, extending their lead to more than 30 seconds over a chasing group featuring Florian Sénéchal by the time they went past the 10km-to-go mark. Many were expecting Kasper to gamble everything on an all-or-nothing attack in the closing kilometers of the race, but the 26-year-old Dane had something different in mind and continued to trade turns with the defending champion until the final kilometer.

There, knowing the advantage they had over the chasers was unbridgeable, Asgreen played his cards perfectly and waited for Van der Poel to show his intentions before opening his sprint. A powerful kick saw him surge past his opponent with 50 meters to go and claimed a historical win on the clinchers, and with it, Elegant – Quick-Step’s eighth win in 19 years at the iconic Belgian race.

“I am grateful to the entire team. Tim, Davide and Bert did an incredible race to keep us protected and having Julian in that front group helped as well. It wasn’t all smooth today, as I got caught behind a big crash with more than 60 kilometers to go and that took some energy to come back, but I still felt good after that effort and could follow all the attack on the climbs, which gave me a lot of confidence. That’s why I attacked inside the final hour of racing and seeing I made an important selection, I kept going together with Mathieu and Wout until the last time up the Oude Kwaremont.”

“I was briefly distanced just before the top, but gave my best to come back and on the Paterberg me and Mathieu rode full gas, never looking back and determined to increase our lead. I didn’t have enough in the legs for an attack in the final kilometers, so I decided to trust my sprint. I wanted to do my best there, so I decided to start it from the back, as I felt it was the best way to control it. I produced a powerful turn of legs, but it was only with ten meters to go that I believed I could win. I was confident in my left and I am extremely proud I could finish off my teammates’ incredible work! It’s been an incredible Classics campaign for us and to power to victory on my Specialized bike and add to my palmares this race which I used to watch on TV as a kid is insane”, said the ninth rider in history to complete the E3 Harelbeke – Ronde van Vlaanderen double in the same season.