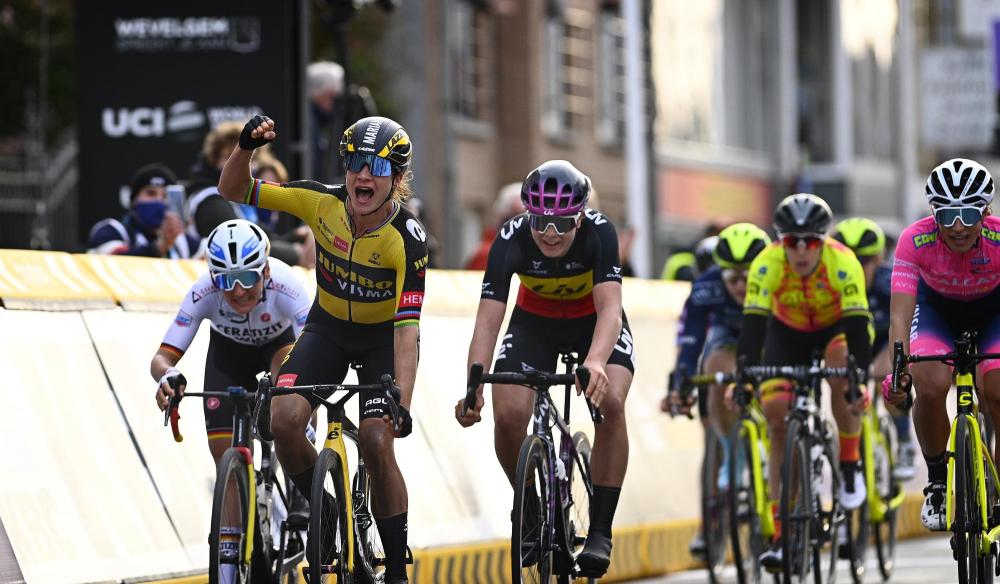 Marianne Vos has written the tenth edition of Gent-Wevelgem to her name. The Dutch rider sprinted to first place and gave the Team Jumbo-Visma women’s team its first ever victory.

Before the start of the 141 kilometre race it was already clear that the wind would play a major role. Throughout the day several riders tried to break open the peloton, but without success. Only on the second climb of the Kemmelberg the race really broke loose.

With about thirty kilometres to go Anna Henderson went on the attack. She took a lead of more than twenty seconds on the peloton. Eventually she was caught by the chasing group.
In the final Borghini and Paladin escaped from the peloton. It was only in the final kilometre that the Italian duo was caught by the chasing group. Vos then set up the sprint and crossed the line first after an explosive final sprint.

“I have to let it all sink in for a while”, Vos said. “This is a fantastic feeling. The past few races we built up a lot of confidence and we knew we were ready as a team. It was a tough and nervous race where we had to stay alert all the time. We had to fight for our position all day, until the sprint. When we finally managed to catch Longo Borghini and Paladin, I was so eager to finish it for the team. Everyone worked so hard today. There were a lot of good sprinters in the group, so it was definitely not easy to beat them. Fortunately, the team had confidence in me and I knew I had a good chance if I would not make any mistakes. At the 200 metre mark, I went on the attack. It felt like I went too early, but fortunately the tailwind was in my favour. I’m extremely happy that I was able to finish it.”