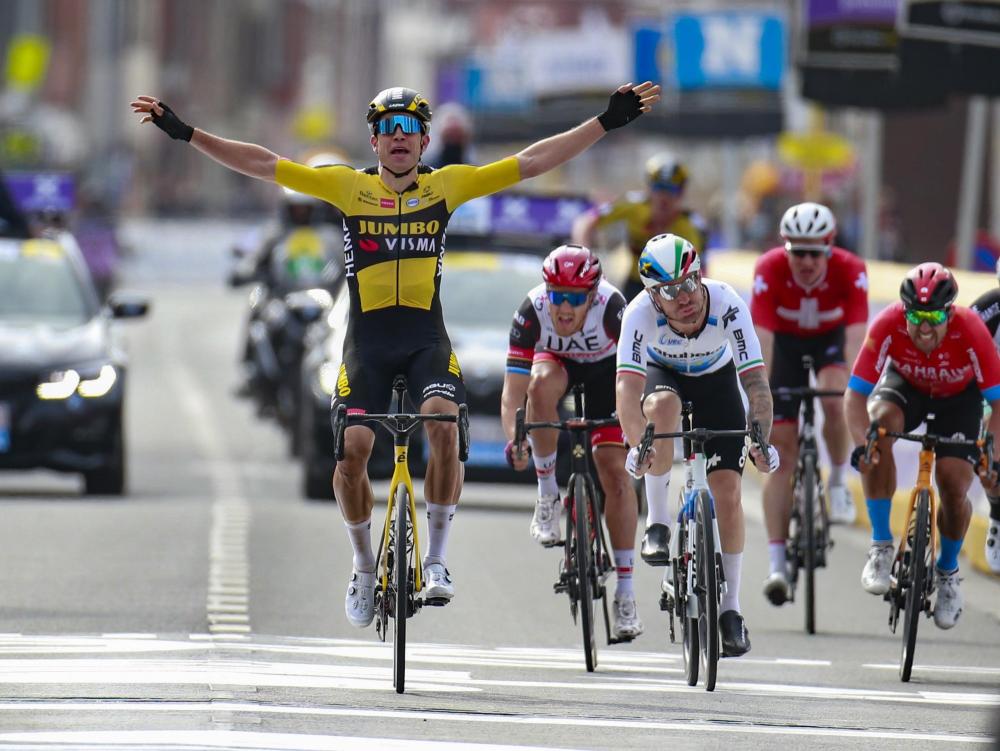 Wout van Aert has written the classic Gent-Wevelgem to his name. By being in the right echelon early on with the very strong Nathan Van Hooydonck, the Fleming was able to sprint to the prestigious victory on pure power. It is the eleventh victory of the season for Team Jumbo-Visma.

In the opening hours it immediately became clear that the wind was going to play a major role. Team Jumbo-Visma rode attentively from the front and had two men in the first echelon with Van Hooydonck and Van Aert. The early breakaway was caught and  went to the West Flemish hill zone together with the connected echelon. On the hills and plugstreets, the chasing groups did get closer, but never returned to the very front of the race. Van Aert impressed on the Kemmelberg, but his companions and Van Hooydonck kept up with him. Partly due to the great work of the sublime super domestique, Van Aert could sprint to victory in the streets of Wevelgem.

The best one-day rider of 2020 clinched his third triumph of the season in Wevelgem. Earlier, Van Aert won two stages in Tirreno-Adriatico.

“This means a lot to me. Of course I have already won many beautiful races, but in the Flemish races it often just didn’t work out. I was waiting for this. I’m super happy with this, of course.”

“As a team we have continuously kept the focus on the wind and the echelons. You know that’s almost always the case in this race”, Van Aert said. “It soon broke open and I was in the right echelon with Nathan. We worked well together and kept control of the race. The confidence in the final sprint was there, of course.”

The Team Jumbo-Visma leader gave his Flemish companion the deserved compliments. “I have been encouraging Nathan all along to also survive the last time on the Kemmelberg. He did. That was really super strong of him. I knew I was going to need him a lot afterwards. In the last kilometre he took the lead. A top notch performance. Hats off to him.”

“Today we proved that we can win a race even without a dominant team”, the outstanding Van Hooydonck said. “This is really a fantastic feeling. We always kept on riding. We had to, because the chasers were never really far. Wout told me to keep up the pace. Sometimes it was a bit of a lynch mob between the many sprinters, but then I quickly caught up to keep the pace. It’s clear that in the end we rode to the finish with the strongest seven riders. Wout can do everything, so I never doubted that he would win the sprint.”