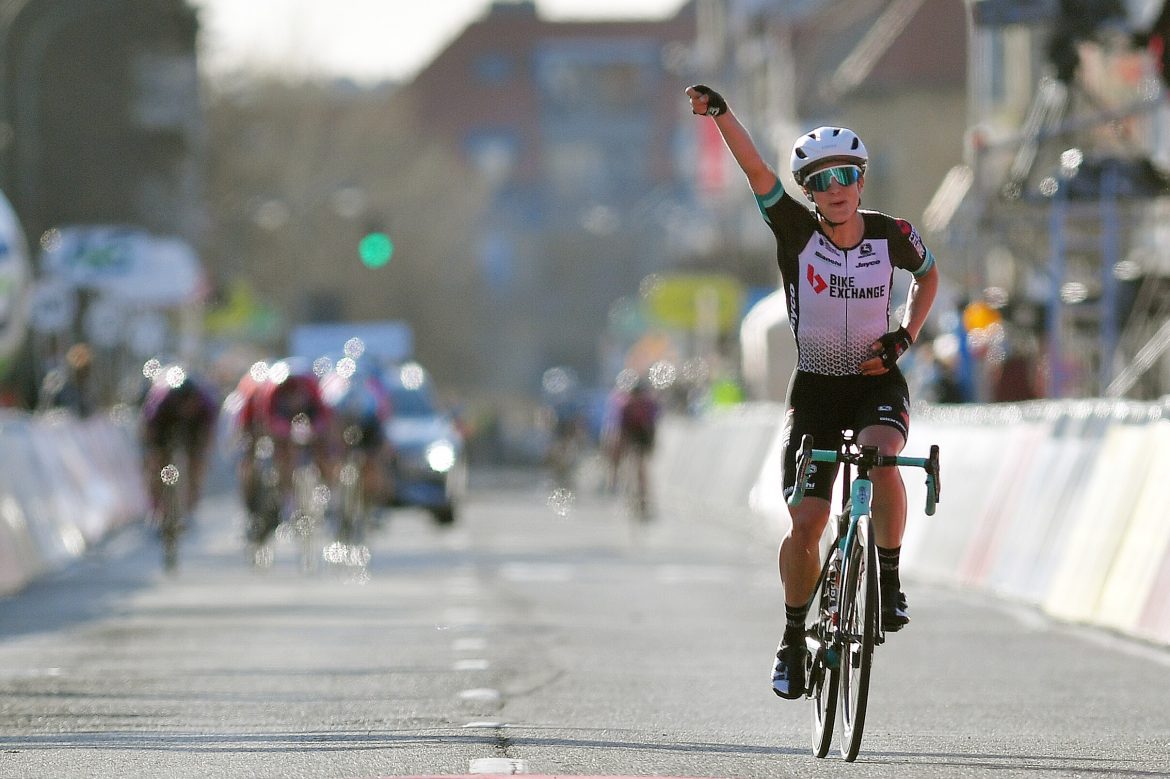 Grace Brown defied the sprinters in Belgium as she soloed to her first WorldTour victory in emphatic style at Brugge-De Panne.

The Australian made the decisive split of 13 riders in The Moeren crosswinds section with 35km to go, with the 28-year-old positioned at the head of the peloton thanks to impressive teamwork from 2021 new signings Teniel Campbell and Arianna Fidanza.

With a host of sprinters in the group, Brown knew her best chance of victory was to go solo and with 10km she launched a stinging attack through a technical section of the course. The 2020 Brabantse Pijl winner quickly opened up a gap of more than 20 seconds as the group began to look at each other.

Brown took full advantage of the hesitation behind as she held the chasers at bay and powered to a superb solo victory, her first in the women’s WorldTour.

Grace Brown:
“I’m in shock really, because the first half of the race I didn’t feel like I was racing very well, but then I managed to get into the echelon. I was the only one of our team in that group and all the other top sprinters were there, so I knew that if I was going to have any chance I’d have to attack at some point. So I gave it a go, I didn’t think I’d pull it off, but I did!

The gap got up to 20 seconds and it sort of held around there most of the time, I think it came down a little bit towards the end, but I just managed to hold on.

Teniel and Ari did a really good job in the crosswinds, especially on the first local lap, that created the first split in the peloton and then I think all the other teams were ready for that point on the second lap and that’s when it split the second time. The girls were really helpful getting me into position just before that happened, so it was a good team effort.”

Martin Vestby (Sports Director):
“The split for us was good, we can win from smaller groups. It was a pity that we didn’t have Sarah Roy there as a sprinter, because that group had all the top sprinters in and the only chance we had was to give it a go and use Grace’s strength as a TT rider.

We encouraged her to choose a moment at a time when the others weren’t expecting it. She picked the moment herself and we knew that if she could go into the headwind section with around 10 seconds, we have seen in the other races that they really need some power behind to close that gap.

I think with the last two races here in Belgium the team have really improved and have taken some really big steps from the first races. Now they’re really starting to race as a team, with communication, being there together and supporting our leaders.”