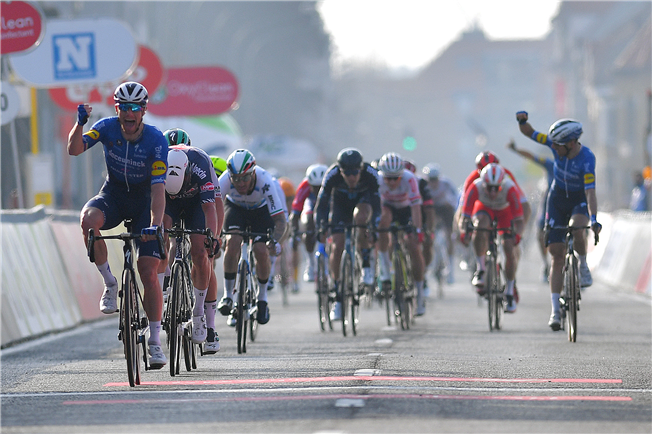 Sam Bennett took his first career victory in a World Tour one-day race in spectacular fashion, winning the 45th Driedaagse Brugge-De Panne by several bike lengths after another dominant lead-out of his Deceuninck – Quick-Step teammates. The 30-year-old, who has enjoyed a red-hot start to the season, winning four of the six bunch sprints he contested since kicking off his campaign in February, was the outright favourite and proved on the finishing straight why he carried this tag going into the race.

Our team led through the final left-hand corner, having been brought at the front by Florian Sénéchal and Bert Van Lerberghe, who were outstanding in positioning the Wolfpack train at the front going under the flamme rouge. Sam Bennett had Michael Mørkøv for company with 200 meters to go and once he came off the wheel of the experienced Dane, he launched a devastating sprint that gave absolutely no chance to Jasper Philipsen (Alpecin-Fenix) and Pascal Ackermann (Bora-hansgrohe).

The 30-year-old won by several bike lengths, just as he did at the UAE Tour and Paris-Nice, notching up his fifth victory of the season. By doing this, Sam became the sixth different Deceuninck – Quick-Step rider in ten years to win the Belgian race and helped the Wolfpack increase their lead in the UCI World Team Classification.

“It’s a great day for me and the team. Winning a World Tour one-day race was something I’ve been chasing for many years and I’m very happy to get it here today. The guys did a fantastic job, remained calm and worked hard for this result the entire day. I can’t thank them enough for this. In the last meters, I didn’t focus on anyone else, just did my sprint and now I’m happy with this win, important for us but also for our Belgian sponsors. The confidence is high in the team, which is excellent ahead of our next races”, an elated Sam said after his success.