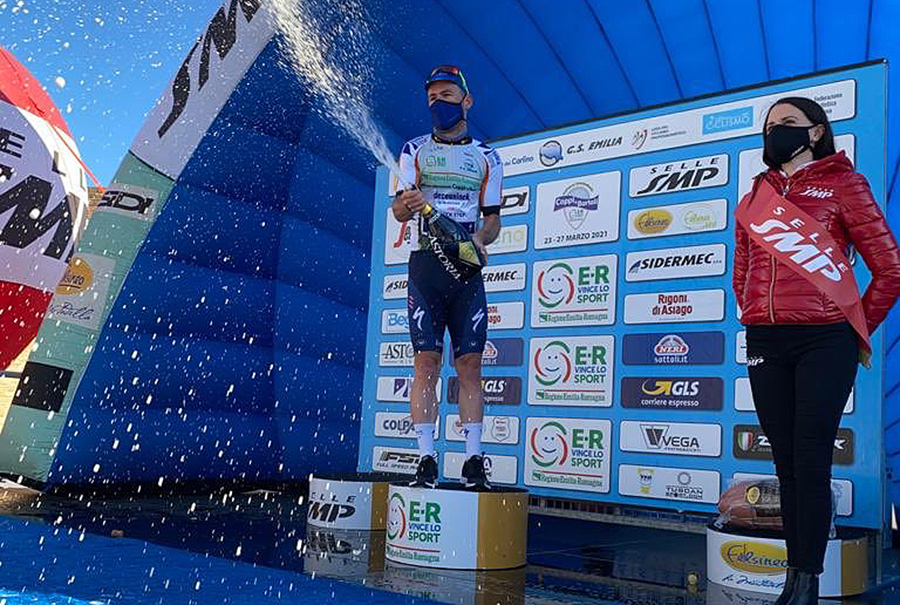 Mark Cavendish returned to Italy – a country where he claimed some of his finest triumphs – after almost two years and needed just a couple of hours to leave his mark on the Settimana Internazionale Coppi e Bartali. In the morning half-stage around Gatteo, the former World Champion was guided into the final kilometer by Shane Archbold, closing to just half a wheel behind an impressive acceleration by Jakub Mareczko (Vini Zabu).

His second podium of the season brought valuable bonifications, which ended up playing an important role at the end of the second half-stage, a short and fast team time trial held in the afternoon. Despite being in just five riders – Archbold, Cavendish, Garrison, Honoré and Vansevenant – Deceuninck – Quick-Step rode a fantastic stage, averaging close to 56km/h and missing out on the win for a mere two seconds against a seven-man Israel Start-Up Nation.

The Manxman, who is riding his first stage race of the season in Italy, went to the podium straight after the TTT to collect the leader’s jersey, which he will now wear on the hilly stage 2 between Riccione and Sogliano al Rubbicone.

“Two podiums in a day and the leader’s jersey here, it’s not too bad. Though we just missed the wins, I am extremely proud of our five-man group here. The lads looked after me in the morning and I was disappointed not to repay their hard work with a victory. But then, in the afternoon, we committed against the odds in the team time trial. I couldn’t be happier to at least get to lead the race after day one, especially as it’s the first time in four years that I lead a stage race. Now some hilly stages await and we’re motivated to work hard for our GC guys”, said the first British rider in six years to lead the Settimana Internazionale Coppi e Bartali.